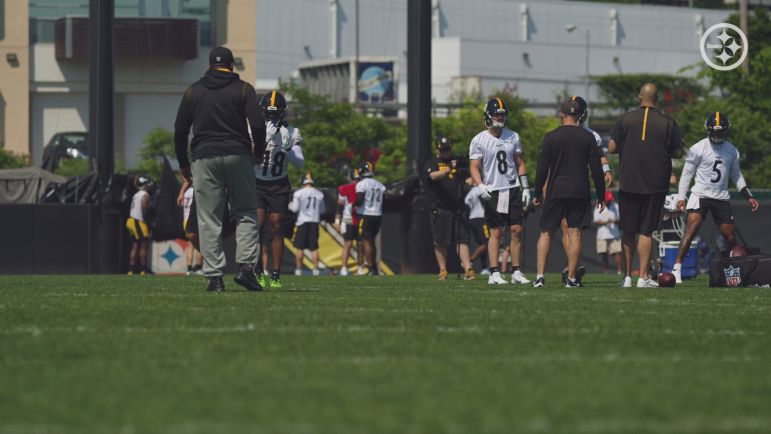 It can be easier for people to forget about or lose track of late-round draft picks, especially if they are players coming in at positions where it looks like on paper the numbers aren’t going to be there for them to make the 53-man roster. When he’s the second or third player drafted at that position by the team, it’s even easier to forget about him.

But it’s usually great for the guys who come in together. We have seen time and time again the stories of players, even when one is a first-round draft pick and the other toward the end of the draft, coming in together and sharing a bond built around being in the same position of learning from the beginning. That’s what we’re seeing with Pittsburgh Steelers quarterbacks Kenny Pickett, drafted in the first round, and seventh-rounder Chris Oladokun.

“Chris Oladokun came in with me, and we’ve been kind of attached at the hip. We do pretty much everything together”, he told Pat McAfee on his self-titled program yesterday. “Extra meeting time, film, going over the playbook and everything. Everyone’s kind of moving towards the same direction. We just want to win, so there’s definitely high expectations coming into the season”.

While the Steelers drafted Pickett to be the future face of the franchise, the selection of Oladokun was a move to fill out the depth chart in the hopes that he may have enough traits that will allow him to stick. Right now, the latter is on the outside looking in behind Mitch Trubisky, Pickett, and Mason Rudolph, but many have wondered if Rudolph might not be traded.

That would be the most obvious way that Oladokun makes the 53-man roster, though he could also be signed to the practice squad if not. Either way, right now, he and Pickett are an invaluable resource for one another as they take their first steps into professional football.

This is hardly unique. We saw it with Emmanuel Sanders and Antonio Brown back in 2010, the ‘Young Money Crew’. The same with Curtis Brown and Cortez Allen a year later, or T.J. Watt and Keion Adams in 2017, followed by Terrell Edmunds and Marcus Allen a year later.

Having somebody you can relate to so readily, somebody who is in the exact same position as you trying to do the exact same thing, can be a tremendous tool, both practically and intangibly. You can work together, of course, but you can also commiserate about your experiences, maybe even acknowledge when things are tough, and of course, when one is down, the other can lift the pair up.

Needless to say, this shouldn’t be all about how Oladokun is an asset to Pickett. As I said, it goes both ways, with Pickett being of benefit to Oladokun, who isn’t simply ‘the other quarterback’, but perhaps later this year a member of the 53-man roster.