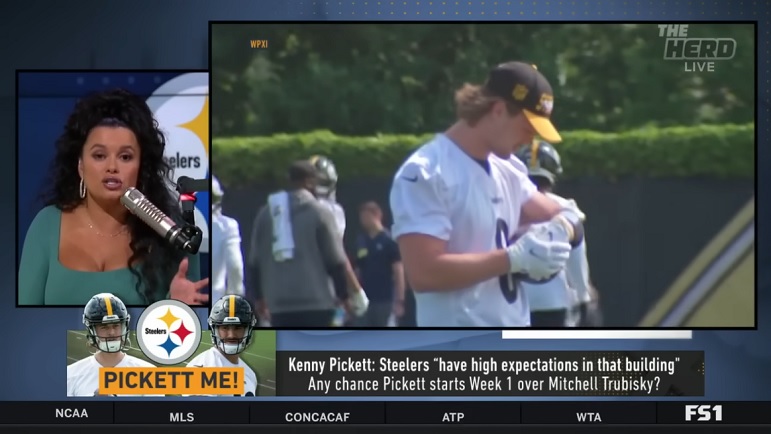 Mitch Trubisky or Kenny Pickett? That’s the most pressing question for the Pittsburgh Steelers as they head into training camp less than one month from now with a roster that looks substantially different than a year ago. It’s certainly plausible Trubisky and Pickett could be locked into a tight race throughout the summer. Speaking on the topic during Thursday’s show of The Herd, host Joy Taylor said any coinflip should lean Pickett’s way.

Trubisky seems certain to enter the summer as the favorite and figures to take the first team reps of training camp after acting as the #1 during the spring. In fact, it’s likely Pickett starts the summer off as the #3, where he ran during OTAs, before moving up the ranks. That means Pickett’s reps could be limited at the start of camp, though Pittsburgh is likely to mix and match and put Pickett in critical situational football, like seven shots and two-minute drills that occur about every other day during camp.

Clearly, the organization hopes and thinks the future is Pickett. So long as he’s ready, the sooner that process starts, the better. And logically, if the battle is a razor-thin margin, the edge could go to Pickett to find out what you have in him. But Pittsburgh is bound to take the approach of truly the best man, even if the winner beats out the other by only a hair.

What will decide the starter? Whichever quarterback shows the best mastery of Matt Canada’s offense, handling play action and ball fakes, throwing on the move, and executing play action with a consistently accurate deep ball. Leadership will also be critical and both men, Trubisky and Pickett, have displayed that already. Of course, taking care of the football is always paramount. Fumbles, interceptions, bad exchanges under center and at the mesh point to the back or receiver on jet sweeps, turnovers or near-turnovers are the quickest way to the bench.

Taylor made an excellent point about the value of Pickett sitting on the bench.

There is no black and white answer to when rookie quarterbacks play. Some play right away and succeed. Some sit for a little bit and benefit from it. Rookie quarterbacks play when they show in practice they’re ready but Taylor is right the only way to really learn is to put a helmet on, take the field, make a couple mistakes, and grow. Soon enough, Pickett will be in that spot. He’ll either sink or swim, buoy or drown the franchise. But that’s the risk you take in a first-round quarterback.

Overall, a very level-headed take from Taylor. A whole lot better than what we normally get from the other guy.