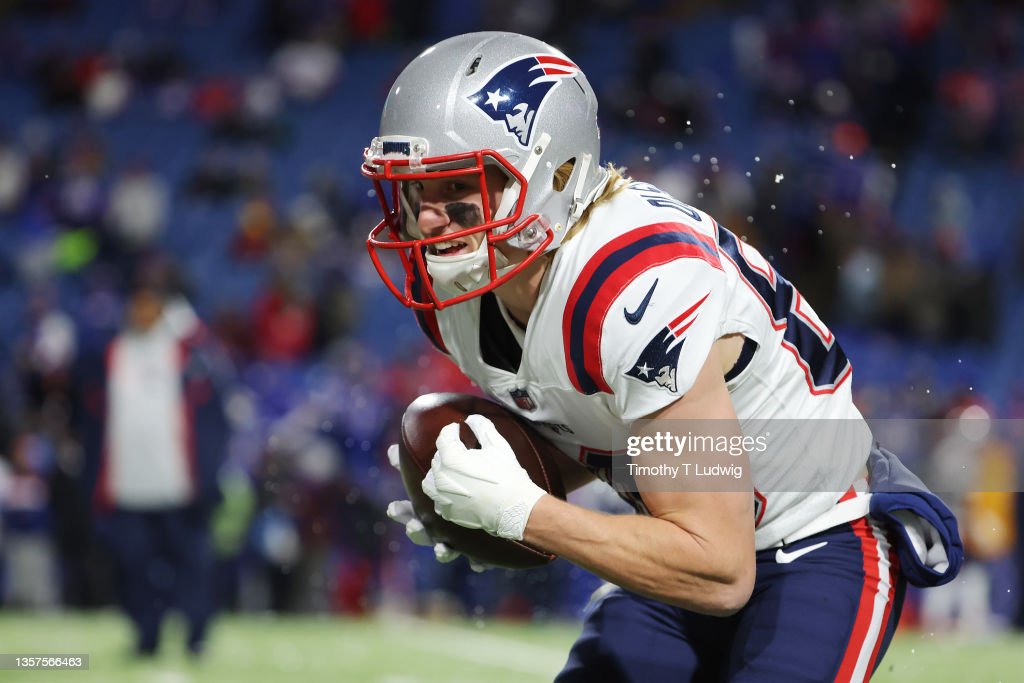 When asked on the Steelers Blitz program with Arthur Moats and Wes Uhler about what the next step is for Olszewski in terms of development as a NFL player, he didn’t shy away from sharing he was to make more of an impact on the offensive side of the football.

“I want to get the ball anytime I can because I think what I can do with the ball is good,” Olszewski responded. “I can take care of it and I am trying to get onto the field and learn.”

While Olszewski hasn’t made much of an impact as a pass catcher in his first three seasons in the league (nine receptions for 127 yards and one TD), his statistical output needs to be taken into context. Olszewski battled his way onto New England’s roster back in 2019 as a UDFA out of D-II Bemidji State where he starred as a defensive back, never seeing the field on the offensive side of the football. To not only make an NFL roster as a kick and punt returner, but to also make the successful conversion to WR at the NFL level as a secondary position speaks to Olszewski’s versatility and willingness to do what he can to make an impact for his team.

“It’s been three years,” Olszewski followed up what Moats stated that he’s still picking up the receiver position. “But you can’t give me that. ‘Oh, he’s a former corner’. I’ve played in the NFL.  I haven’t played much in the game, but I’ve played for three years as a practice receiver. That’s all I practiced up there. So, at this point I’m a receiver.”

Olszewski has a point as while the statistical output hasn’t been eye-popping during his time with the Patriots, he has come up with a couple clutch plays as a pass catcher when his name has been called upon. The Steelers signed him nearly 24 hours after losing WR/KR/PR Ray-Ray McCloud to the San Francisco 49ers on a two-year deal worth $10 million, nabbing Olszewski for two years, $4.2 million, a steal in terms of money allocated for a hopeful special teams return ace.

While McCloud may have been a more dynamic, accomplished than Olszewski with his performance last season in Pittsburgh, a lot of that come out of necessity when injuries struck Pittsburgh’s roster after losing JuJu Smith-Schuster for a majority of the season. As the say in fantasy football, volume is king, and McCloud made the most of his opportunities last season, racking up 38 receptions for 367 yards.

Still, while Olszewski may be a little optimistic regarding his chances to contribute on offense with the likes of Diontae Johnson, Chase Claypool, Miles Boykin, George Pickens, and Calvin Austin III in the same receiver room, but he’s approaching the offseason workouts and training camp like he’s on the same playing field as the new guys who were just added to the roster.

We have signed WR Gunner Olszewski to a two-year contract. @BordasLaw

“You can take rookie guys who play receiver their whole life, and they’re learning a new position,” Olszewski continues. “They’re playing NFL receiver now. I’m a receiver. I’ve been a receiver. So, I’m trying to improve my game in that aspect, for sure.”

#Patriots all-22: Pats got Gunner Olszewski open for his 29-yard catch on the dagger concept. Meyers runs a vertical clear out and Gunner runs a deep dig underneath it. #Giants in cover-2 and Meyers takes two defenders leaving nobody over the middle to take Gunner. pic.twitter.com/eaTaxEuUrd

Olszewski may have a point, as while Pickens and Austin aren’t going through a position change like he had to go through when transitioning to the NFL, they will have to take this season to adjust to the NFL game in terms of the speed of the defense, ability to process an NFL playbook, and consistently win against NFL cover cornerbacks. Olszewski has been in the league three seasons now going onto Year Four, so he has experience on his side, for what it’s worth.

However, no one is likely going to say that Olszewski has a better chance to establish himself as an NFL receiver than Pickens and Austin, so that comparison may be a bit of a stretch.

Regardless, Olszewski knows his role on the roster comes via his impact on special teams yet understands that producing more on the offensive side of the football is one thing he must work on to expand his role on a team. It may be tough for Olszewski to do that not in a suddenly stocked WR room, but stranger things have happened in the past, and it only takes and injury or two (fingers crossed it doesn’t happen) for a player to find himself in a great opportunity.