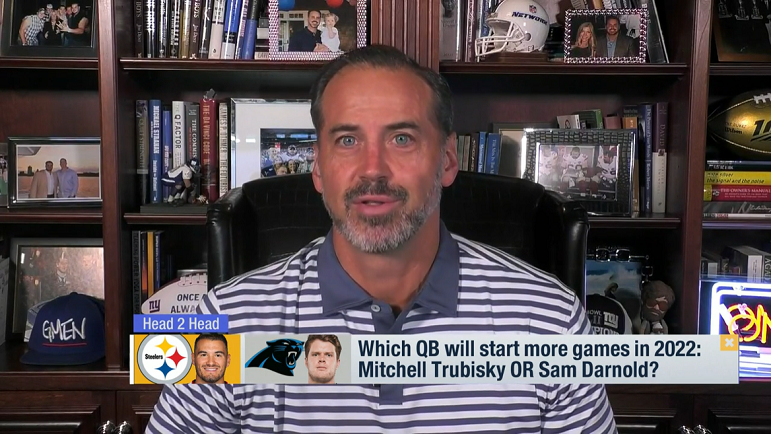 When it comes to former high draft picks at quarterback in Pittsburgh Steelers’ veteran Mitch Trubisky and Carolina Panthers’ veteran Sam Darnold, the two are in completely opposite situations.

Trubisky, the prime target for the Steelers in free agency, steps into a potential starting role in Pittsburgh, one that could provide him with serious stability for the first time in his NFL career after being the No. 2 overall draft pick in the 2017 NFL Draft. Darnold, on the other hand, has already been traded once, and has openly seen the Panthers searching high and low on the quarterback market.

Despite being in a more favorable situation, Trubisky will start less games than Darnold, according to Good Morning Football’s Shaun O’Hara Friday morning.

Discussing the two veteran quarterbacks seemingly getting one last shot at redeeming their careers, O’Hara believes it will be Darnold — despite the Panthers searching for a new starting quarterback — who starts more games than Trubisky, considering Trubisky will have to hold off first-round draft pick Kenny Pickett in 2022.

“This is kind of a tough one, KB [Kyle Brandt], because Trubisky actually has a winning record and Sam Darnold doesn’t. So, you’d be inclined to say that Sam Darnold’s gonna miss more games, but I think I’m gonna go with Sam on this one to start more games than Mitch Trubisky,” O’Hara said on Good Morning Football Friday morning, according to video via NFL.com. “And here’s why: look, I think the Steelers are a playoff team. They went to the playoffs last year. They are playoff caliber, but I think when you take into account the fact that Kenny Pickett was a first round pick, that puts added pressure on Mitch Trubisky.

“If they don’t start out the season very strong, all of a sudden the conversation is ‘all right, we gotta get Pickett in there,'” O’Hara added. “Like, you know what? We we’ve got a good team. We gotta find a way to win some games here. I feel like Sam Darnold has a little bit more of a leash down there in Carolina. Obviously with Ben McAdoo, the new offensive coordinator, here’s gonna be some growing pains, but I don’t feel like there’s as much pressure on Sam Darnold coming from a third rounder in Matt Corral, as Trubisky has up there in Pittsburgh.”

O’Hara’s reasoning is certainly sound, as Pickett will be pushing Trubisky throughout training camp and into the regular season, assuming he’s unable to beat out the veteran outright for the job. However, the Panthers — despite all the lip service — aren’t sold on Darnold, especially after a rather trying 2021 season that saw him play well to start the year before collapsing entirely.

Though he doesn’t mention it in his reasoning, O’Hara knows that the Panthers remain interested in Baker Mayfield and Jimmy Garoppolo, while Trubisky is truly the headliner for the Steelers right now.

Of course, if the Panthers completely go into the tank again and Darnold struggles, he still might end up playing the entire season, barring injury, to help secure a high draft pick. Trubisky will have to play at a high level to hold off Pickett no matter what, as the Steelers aren’t going to let a 24-year-old rookie sit on the bench for his entire first season.