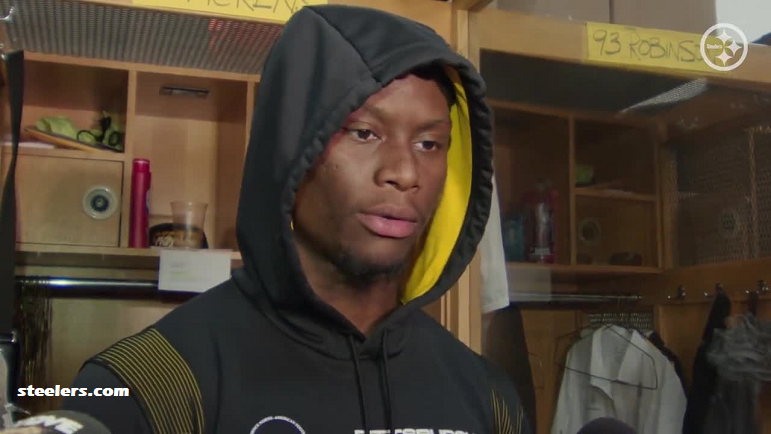 In the news often lately due to his contract situation, Pittsburgh Steelers’ wide receiver Diontae Johnson finds himself much maligned at this point in his career, at least from outsiders, due to his potential contract demands, as well as some overall drops issues.

However, inside the locker room the fourth-year receiver remains beloved by teammates old and new, especially rookie wide receiver George Pickens, who is stepping into the wide receiver room with a lot of hype and overall buzz.

Speaking with reporters Wednesday morning prior to the second day of mandatory minicamp, Pickens praised his new teammate, saying he’s a lead-by-example guy, so younger players should want to lock in on him and learn from him overall, while also crediting his ability to create space for fellow receivers on routes.

George Pickens on Diontae Johnson, Mitch Trubisky, adjusting to playing in the slot and more. pic.twitter.com/IKjdKiblVw

“He’s a great route runner. His pace and routes is amazing too,” Pickens said to reporters, according to video via the Steelers Live Twitter account. “So you have a certain route, he’ll set you up to get you open without even trying. Like, it’s not even his intent. But, the way he run routes, his details in routes, really everything he does is really just an overall receiver.”

That tends to be the label Johnson gets hit with, especially at this point in his career. He’s one of the top-end route runners in the NFL overall, and draws a ton of attention weekly from opposing defenses due to the volume of throws he sees his way, as well as how dangerous he is overall within his routes, allowing him to create a ton of space and separation, leading to big plays for the black and gold.

Though he’s a receiver, and one with a high profile not only in Pittsburgh, but across the league as well, Johnson is the quiet type that leads by example, rather than the rah-rah look-at-me-type you see lately from receivers. That’s endeared him to a young receiver like Pickens, who is trying to learn as much as he can from the fourth-year receiver right now.

In the second year of offensive coordinator Matt Canada’s scheme, along with the additions of quarterbacks Mitch Trubisky and Kenny Pickett, Johnson should see his production improve in 2022, at least in terms of average depth of target and average yards per reception. With added pieces around him in the passing game including Pickens and fellow rookie receiver Calvin Austin III, Johnson should see less attention overall from defenses in what is a contract year for the former third-round draft pick.

Don’t expect the contract stuff to cause problems for Johnson either. He’s locked in, ready to work and just wants to win. All that other stuff will work itself out in the end, whether that’s in Pittsburgh or elsewhere.