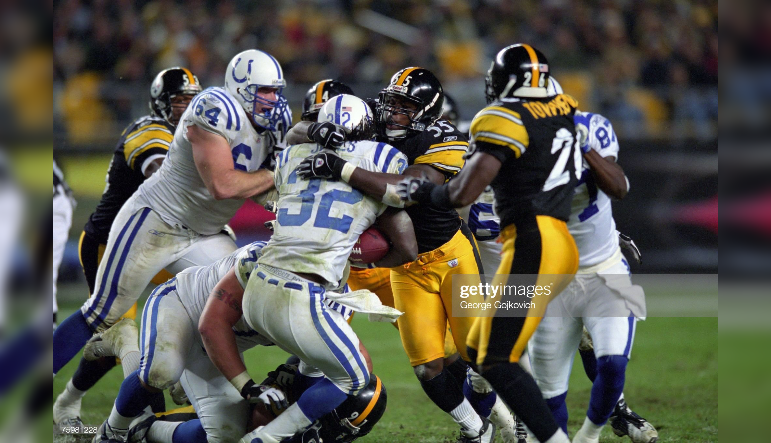 Throughout the years, the Pittsburgh Steelers and Indianapolis Colts have had some impressive battles overall.

However, the Week 6 matchup on October 21, 2002 at Heinz Field on Monday Night Football was not one of those impressive battles. Instead, it was the Steelers’ defense coming up big against arguably the greatest quarterback in NFL history in Peyton Manning, turning in a dominant display on the defensive side of the football.

Along with the dominant defensive display, the Steelers rode a powerful rushing attack and a ball-controlled passing attack under Tommy Maddox to cruise to a 28-10 win over the Colts in front of a national audience in the second season at Heinz Field.

That night, Manning and the Colts’ high-flying offensive attack featuring the likes of future Hall of Famers Edgerrin James, Marvin Harrison, Reggie Wayne and — of course — Manning, looked rather average overall, thanks to the speed and physicality of the Steelers’ defense against the pass-heavy Colts.

Right away that night at Heinz Field on a 48-degree night, the Steelers’ defense got after the Colts in a hurry.

Though James ripped off a 14-yard run on the first play from scrimmage, the Steelers’ defense under Bill Cowher and Tim Lewis tightened up, forcing two quick incompletions by Manning, leading to a punt from Indianapolis’s Hunter Smith.

That’s when Steelers’ outside linebacker Joey Porter came up large, sending the home crowd into a frenzy.

Porter broke free from the left side of the Colts’ formation, slipping around a block to get his hands on Smith’s punt, sending it out of bounds for a partial block and a 3-yard punt, giving the Steelers great field position to open the game.

Five plays after the punt, thanks to tow completions from Tommy Maddox to Plaxico Burress for 9 and 10 yards, Maddox found a wide open Hines Ward from 17 yards out up the left sideline in front of the left pylon for the game’s opening score with 10:25 remaining in the first quarter.

That’s a heck of a throw from Maddox in the hole shot. He could really sling it back then.

Following the Steelers’ first score of the game, the defense continued to hold the Colts at bay, forcing a punt from near midfield , thanks in large part to a holding call on Colts’ right guard Ryan Diem on the fourth play of the drive, putting Indianapolis in a big hole.

After the Colts’ punt, Maddox and the Steelers went right back to work. The journeyman quarterback found Plaxico Burress for 18 yards on the first play of the drive, and then a facemark on Colts’ defender Raheem Brock gave the Steelers 15 free yards a few plays later.

Maddox later found Ward for nine yards, leading to three straight runs up the gut from Bettis from inside the red zone, leading to a 3-yard touchdown run with 48 seconds left in the first quarter, staking the Steelers to a 14-0 lead after a Todd Peterson extra point.

It sure is awesome to see that display of emotion from Bettis all those years later. He truly was the heart and soul of the Steelers, right alongside Ward.

With a 14-0 lead in hand, the Steelers’ defense could really pin its ears back and get after Manning. That’s exactly what they did, while keeping James bottled up. A 12-yard connection from Manning to Harrison sparked the Colts’ drive though, as did a 13-yard pass interference penalty on Steelers’ linebacker Kendrell Bell.

Ultimately though, the Colts drive ended with nothing as Mike Vanderjagt missed a 48-yard field goal, keeping the Colts off the board.

Using the missed field goal as a big momentum boost, the Steelers offense again went right down the field against the Indianapolis defense.

Maddox found Burress for nine and 15 yards, Antwaan Randle El ran for 16 yards on a direct snap, and Maddox then found fullback Dan Kreider out of the backfield for nine yards.

That led to Bettis capping off his second straight drive with a touchdown.

My goodness, look at the blocking on the left side from Wayne Gandy and Alan Faneca, not to mention Kreider leading the way. I sure do miss that, and I’m sure many Steelers’ fans miss that as well.

Hopefully that returns in 2022.

Holding a 21-0 lead, the Steelers were very clearly in the driver’s seat against the high-powered Colts’ attack. The lead effectively turned the Colts into a one-dimensional offense, putting the football in Manning’s hands.

He responded by leading the Colts on a scoring drive, finding Marcus Pollard for 16 yards, Reggie Wayne for 13 yards, and Troy Walters for 13 yards before Brent Alexander put an end to the drive with a key sack off of a safety blitz, sneaking home to get the star passer, thanks in large part to a miscommunication with a receiver.

This time, Vanderjagt didn’t miss for the Colts, drilling a 41-yard field goal to make it 21-3 with two minutes left in the half.

The Steelers then went into a two-minute mode and pulled out some gadgetry. Maddox faked the toss to Randle El out of the backfield to the left and then quickly fired to Ward on the right on a wide receiver screen. A great block from running back Amos Zereoue sprung Ward, who weaved his way through the Colts’ defense for 31 yards, setting the Steelers up at the Colts’ 39.

Two plays later though, Maddox was picked off by Indianapolis linebacker Mike Peterson, who returned the ball 31 yards, setting Manning and the Colts up at the Steelers’ 37 with 36 seconds left as the Colts aimed to take advantage of the first Steelers’ mistake of the game.

Indianapolis couldn’t though, thanks to Alexander again as the veteran safety picked off Manning at the 1-yard line on a desperation heave with 12 seconds left, sending the game into the half.

Coming out of the locker room, the Steelers went three-and-out on the first drive of the second half, giving the Colts new life.

Manning took advantage, finding a wide open Marcus Pollard for the 41-yard score, making it a 21-10 game with 11:46 left in the third quarter.

Pittsburgh then went three-and-out again offensively, but the Steelers’ defense told tall as McKeesport native Mike Logan came through in the clutch.

With the Colts driving thanks to an 11-yard completion from Manning to Harrison, and then a 23-yard hookup from Manning to James out of the backfield, the Steelers needed a play. There’s where Logan came through. Playing the robber role in the middle of the field, Logan read Manning’s eyes the whole way, leading to the interception and the 46-yard return, giving the Steelers the football at the Colts’ 19.

Three plays later, Maddox found Ward from 14 yards out for the score, making it 28-10 Steelers with 5:54 left in the third quarter.

A sack by Aaron Smith ended the next Colts’ drive before a turnover on downs on a failed 4th and 1 run by Zereoue gave Indianapolis the ball back.

Alexander came through one more time for the Steelers though, picking off a tipped pass from Manning intended for Pollard, returning the interception 25 yards, setting the Steelers up near midfield.

A promising drive featuring runs from Zereoue and Chris Fuamatu-Ma’afala ended with a Peterson missed field goal from 48 yards out, but with 1:46 left in the game it didn’t quite matter. The Steelers’ defense was in full control.

In the win, Maddox completed 15-of-23 passes for 188 yards and two scores. Zereoue took over for an injured Bettis in the second half and rushed for 87 yards on 15 carries. Bettis finished with 11 carries for 33 yards and tow scores. Ward hauled in five passes for 76 yards and the two touchdowns, while Burress added six catches for 79 yards.

Defensively, Alexander recorded four tackles, one sack and two interceptions, breaking up three passes in the win. Mike Logan added nine tackles and an interception, while Aaron Smith recorded seven tackles, two tackles for loss and a sack for the Steelers.

Manning finished the game for the Colts completing 32-of-48 passes for 304 yards, one touchdown and three interceptions. James rushed for 62 yards on 20 carries and added a game-high 11 receptions for 83 yards. Harrison chipped in with eight catches for 76 yards, while Pollard finished with four receptions for 64 yards and a score.

The win on Monday Night Football moved the Steelers to 3-3 on the year before they eventually finished 10-5-1, losing in the divisional round to the Tennessee Titans, 34-31, on a controversial 26-yard field goal by Joe Nedney in overtime.