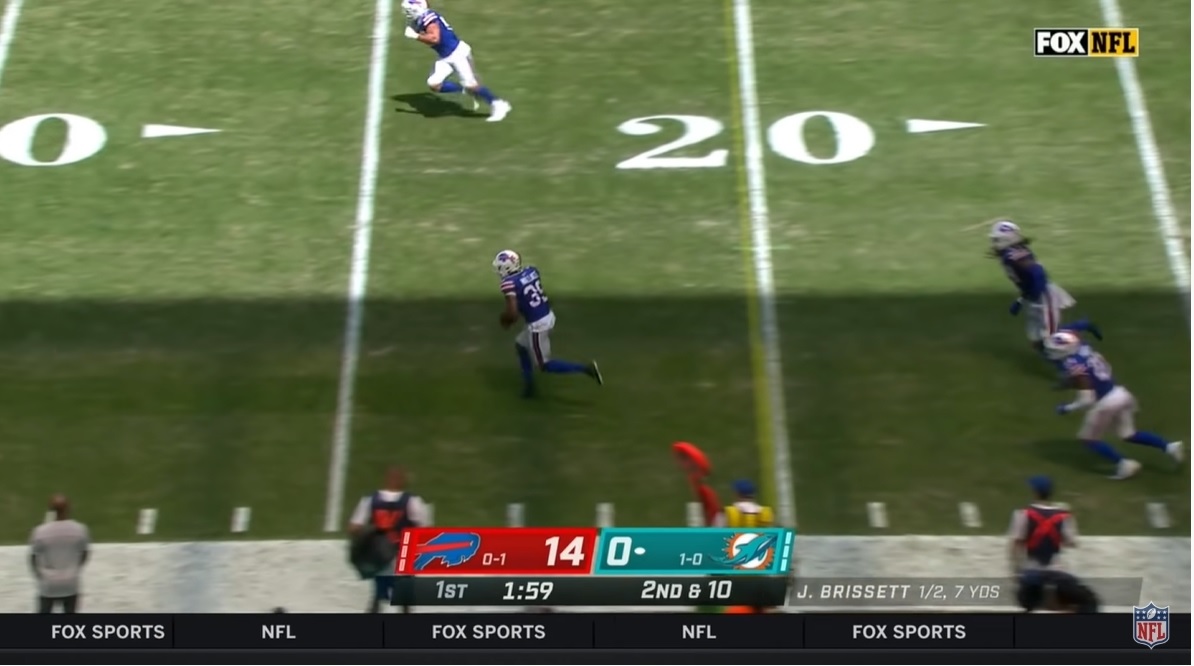 Following the anticipated loss of longtime veteran Joe Haden, who joined the team in 2017, logging 11 TFLs, three forced fumbles 54 passes defended, and 10 interceptions, one of which was returned for a score, Pittsburgh chose to sign Levi Wallace in an attempt to fill his spot on the boundary. Wallace brings experience to Pittsburgh, logging 52 starts in his first four seasons with the Bills, amassing 219 tackles, seven TFLs, 6 interceptions, and 30 passes defended. Similarly, playing alongside a recent Super Bowl contender in Buffalo, Wallace brings great playoff experience, compiling 23 tackles, three TFLs, a forced fumble, an interception, and a pass breakup in five games across two playoff runs.

In evaluating defensive back play, I tend to favor single game evaluations, where one can observe a players consistency in their technique on a rep to rep basis, helping serve as a projection for their continued success or lack thereof in an upcoming season. Likewise, for this article, I decided to focus on Wallace’s performance in a Week 2 matchup in Miami this past season.

Despite logging just 27 snaps before exiting the game early with a minor injury, Wallace made a noticeable impact on the game, finishing with a pair of tackles, a pass breakup, and an impressive interception. Equally intriguing, Wallace showcased great presence and football IQ in both man and zone coverages, consistently finishing plays in close proximity to receivers regardless of assignment.

Despite his slight frame, listed at 6’0” 179 pounds, Wallace does a great job of providing great pursuit to the football and physicality upon arriving at the point of contact. On a rep below, aligned as the overhang defender to the nub tight end in an unbalanced trips set, Wallace identifies the tight end firing off the ball with a “low hat” triggering to flow down the line and pursue the ball carrier on a zone run to the left.

Noticing the cutback, Wallace folds inside, closes to the near hip, and finishes at the point of contact with physicality, helping keep the run from breaking to the third level. While not the primary trait required to play the position, having cornerbacks who are willing and capable tacklers in the run game is an extreme luxury. Particularly in replacing Joe Haden, one of the best run support cornerbacks across the league, Wallace’s ability to remain consistent and active in run support will be vitally important.

While Wallace is extremely aggressive in the run game, he can get himself into trouble when unable to stay clean and play in space. Here diagnosing the crack/replace, Wallace steps down to replace the Taron Johnson’s edge responsibilities, but gets caught peeking inside in the process, allowing Mike Gesicki to seal him inside.

If Wallace had simply held his outside contain and boxed the oncoming blocker, the run would’ve been forced inside to the pursuit, and would’ve been stopped at or around the line of scrimmage. In losing contain, Wallace opens a lane for the back to bounce the run outside, for a gain of 17 and a new set of downs. Maintaining gap responsibilities is an essential part of team run defense, and as is shown below, a single player attempting to overcompensate and play outside of the scheme can open lanes for costly explosive plays.

Playing a cover zero man coverage assignment with no safety help can be one of the most difficult tasks for a cornerback, particularly given the talent and athleticism at the wide receiver position in the modern NFL. Particularly given his lack of top end speed, Wallace utilizes his superior football IQ to anticipate routes and contest the catch point in zero coverage assignment.

Below, with the Dolphins in an 11 personnel doubles set, Wallace aligns pre snap in press coverage before backing off to eight yards depth in a side shuffle, keying the quarterback for a three step read, anticipating that the ball must come out quick with a six man pressure on. Once he identifies a three step drop and see’s the quarterback pull the pin on a hitch route, Wallace plants, drives, and finishes at the catch point with violence, punching through the pocket and separating the receiver from the football with a physical stick. Wallace brings a physical element to the back end of the Steelers defense, consistently punishing receivers at the catch point and making them work hard for quick game completions.

Wallace’s biggest strength as a player is his elite football IQ, which allows him to anticipate and bait routes in zone coverage, where he is undoubtedly at his best. Below, serving as a deep ⅓ defender in a Cover 3 set, Wallace opts to utilize a press bail technique, aligning in press coverage before transitioning into his crossover run at the snap, gaining depth and keying the quarterback. After staying on top of Jaylen Waddle, Wallace keeps his eyes on the quarterback, passing the post route off and breaking toward the sideline, undercutting a wheel route intended for Mike Gesicki, and leaping to secure the interception, returning it down the sideline for a healthy gain.

Wallace executes his zone coverage assignment to perfection here, first disguising his pre snap alignment before gaining proper depth to take away the quarterback’s first read, understanding that if a receiver exits his zone a new one is likely to enter, and staying in phase to break and play the football at its highest point. Wallace has secured a pair of interceptions in each of his past three seasons in Buffalo, and should help bring some much needed turnover creation back to a unit that struggled in that department last season.

While it is not a primary strength of his game given his lack of top end speed, Wallace is able to utilize his lengthy, 32 ¾” arms to disrupt receivers at the line of scrimmage and dictate their path, preventing them from reaching their landmarks in a timely manner. Below, guarding the speedy Jaylen Waddle from a cut split in the boundary, Wallace smartly aligns with outside leverage, forcing Waddle towards his safety help.

At the snap, Wallace stays patient before opening the gate and getting into Waddle’s hip as he declares inside, on a single stick release, maintaining contact from a back shoulder position, and forcing Waddle to work through his body at the top of the route. As Waddle attempts a throw by at the top of the curl route, Wallace smoothly maintains contact, and flips his hips to contest the catch point. While he is not targeted on this rep, his technique is impeccable and shows great understanding of how to play within the scheme and use his help defenders to his advantage.

Once again operating in man coverage, this time in a Cover 1 assignment, Wallace is once again assigned to the speedy Jaylen Waddle, who is once again working out of a cut split, this time in a tight stack behind Mike Gesicki. Once again, Wallace smartly aligns in off coverage at seven yards depth with outside leverage, anticipating mesh, a common man beater traditionally run from tightened splits like the formation we see below.

At the snap, Wallace identifies mesh immediately as Waddle declares shallow underneath, shuffling to his inside before opening to match the receiver, smartly navigating over the traffic before closing downhill to get back in phase with the receiver. While Jacoby Brissett is under heavy pressure and would likely have been able to complete this pass to Waddle, Wallace’s ability to navigate past the natural pick routes and close efficiently likely would’ve limited the catch with minimal space to maneuver for extra yards. Naturally, throughout the course of a game offensive play callers are going to out-scheme defensive coordinators on certain plays, and it is up to the defensive players to execute their assignments to the best of their abilities and prevent said plays from turning into game breaking explosive plays.

Overall, I was extremely impressed with Wallace’s performance against Miami, showing great physicality, football IQ, and understanding of both how to play within certain defensive schemes as well as understanding how offense’s are going to try to attack him. Joining alongside a talented cornerback room with the likes of Cameron Sutton and Ahkello Witherspoon, look for Wallace to add great communication, physicality, and ball skills to the back end of the defense.

Feel free to suggest in the comments if there are any other players within the Steelers secondary who you would like to see single game evaluations of last season. I will look to continue with these as the offseason continues, evaluating players at both the cornerback and safety positions ahead of the 2022 season.