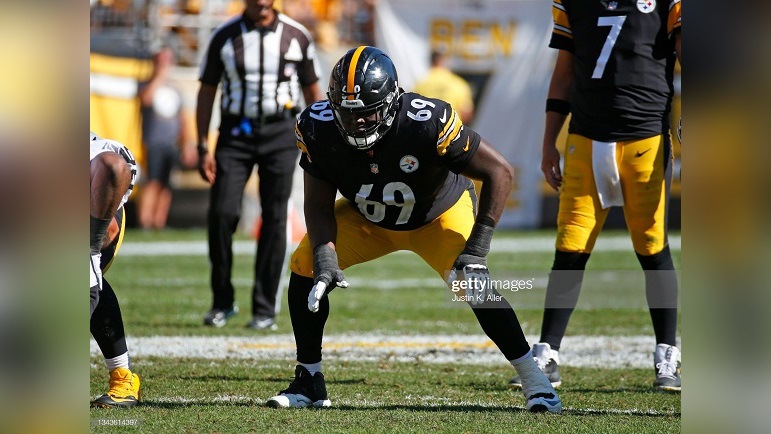 As we transition to the offseason with OTAs and mandatory minicamp behind us, I have taken some film room requests on certain players and aspects yinz want highlighted about their play from last season. For this film room breakdown, I will hold OG Kevin Dotson under the microscope and put forward an argument that he will overcome the injury bug he dealt with last season to put together a strong 2022 campaign, forming a dynamic duo with James Daniels at the guard spots for Pittsburgh.

Prior to the 2021 season, the expectation was that OG Kevin Dotson was going to take a leap forward after his rookie season and become one of, if not the best offensive lineman for the Steelers. After seeing action in 13 games as a rookie with four starts, Dotson was riding high when asked to fill in at either guard spot in 2021. He graded out with a 66.2 overall grade from Pro Football Focus as a rookie, posting an impressive 87.2 grade as a pass blocker on 219 pass blocking snaps along with a 55.1 grade as a run blocker.

Dotson was off to a hot start in the preseason after battling an injury early in training camp, having an impressive showing against the Philadelphia Eagles as highlighted by yours truly at Steelers Depot in a film room. Dotson bullied the Eagles on the ground as a run blocker, showcasing improved play from 2021, especially on the move. Here’s an example of Dotson pulling from the LG spot to the right, picking up the DE crashing inside and drives him clear out of the play to clear a running lane for #26 Anthony McFarland Jr.

Not only was Dotson effective on the move, but also when asked to drive defensive linemen backward when straight up with them. Watch this play where you see Dotson come off the ball and man-handle the interior defensive lineman, driving him back and turning his shoulders to create a seal on the left for Samuels to run through as he spins through contact and picks up an additional five yards from the Dotson block.

We also saw some good moments from Dotson from a pass blocking perspective as well in preseason action. Here on this third down pass attempt, Dotson does a wonderful job in pass protection, ceding hardly any ground to the pass rusher up the middle. He plays with a great base and anchors in against the rush, getting a great initial punch with his left arm then can reset his hands inside and completely neutralize the rush as Haskins finds an open receiver to move the chains.

Dotson kept that momentum going into regular season action, starting all nine games in which he played. While PFF only increased Dotson’s run blocking grade from 55.1 as a rookie to a 60.8 in his second season, you saw a notable improvement in his play on tape. Take, for example, this explosive run by #22 Najee Harris where Dotson makes the combo block from the LG spot against the Broncos. Dotson aids #65 Dan Moore Jr. on the down DL then climbs to pick up the linebacker, helping Najee get into the second level of the defense and pick up the first down.

We see a similar example on this rep against the Detroit Lions where Dotson climbs to the second level to pick up #34 Alex Anzalone, sending him flying five yards on contact and seals him off as Harris picks up first down yardage.

While Dotson’s pass protection grade from PFF dropped from 87.2 as a rookie to 78.4 in 354 pass blocking snaps in 2021, he wasn’t a negative in that area by any means. PFF credited Dotson with three sacks allowed along with two QB hits and five hurries, but Alex Kozora only credited Dotson with one sack allowed in 2021 on 354 pass blocking snaps according to his own charting in a high-quality sack breakdown here on the site. The tape shows a better product than the picture that PFF tries to paint as well like we see on this rep against the Lions where Dotson has his head on a swivel, looking for work. He picks up the defender #51 Trai Tuner passes off to him.

Josh Carney of Steelers Depot wrote a piece earlier this offseason where PFF placed Dotson in the fifth tier of its offensive guard rankings, stating the following about the second-year guard:

“Kevin Dotson’s time in Pittsburgh amounts to almost 1,000 snaps of action now across two seasons, and his pass protection has been elite over that time (aided by Ben Roethlisberger’s league-fastest average time to throw),” PFF’s Sam Monson writes. “Conversely, he has PFF run-blocking grades of 55.1 and then 60.8 on his resume.”

Again, while Dotson did struggle at times getting a body on a defender in open space, as well as got called for five penalties in nine games, his play as a run blocker last season should go unnoticed. He was arguably Pittsburgh’s best run blocking OL last season with his ability to continually displace defenders and create a push upfront. Here is a three-play sequence against the Packers where we see Dotson get the job done on several combo blocks, helping the center or tackle move the defensive lineman off the ball and then go pick up the linebacker at the second level, clearing a path for Najee Harris on three separate successful runs.

Sadly, we never got to see a full season of Dotson as a starter at LG as he suffered an ankle sprain against the Lions in Week 10, causing him to end up on IR where he would remain the rest of the season after failing to be activated from IR once his 21-day practice window opened. It didn’t help matters that Dotson was dealing with an ongoing ankle injury throughout training camp as well, likely leading to the injury he suffered in Week 10 against Detroit. The ankle injury during the preseason kept Dotson from running with the first team at the start of camp, making have to fight to get back on the field likely before he was ready, possibly leading to the aggravation of the injury later on in the year.

Unfortunate ankle injury for Kevin Dotson. Got rolled up on at the end of a play. Tried to gut it out and played another snap but couldn't put much weight on his ankle sprain. #Steelers pic.twitter.com/RQN0nslo62

Recently during OTAs and mandatory minicamp, Dotson talked about a focus on his body this offseason and how he has ramped up his rehab and recovery to not only take care of these injuries that occur during the season, but also to put an emphasis on injury prevention exercises before an injury occurs. As a certified sports performance coach, I can say that I implement injury prevention movements throughout my training programs to help prevent ankle. knee, and shoulder injuries. You can’t prevent every injury from happening but incorporating some rehab/prehab work can help reduce the risk.

So, where are we on Kevin Dotson heading into 2022? Honestly, I would say we are right where we left off at the end of the 2020 season. Dotson has obvious technical issues that need to be worked on as well as has physical limitations when it comes to foot quickness and working in space. However, we saw improvement as a run blocker and steady play as a pass protector compared to the rest of the offensive line, and the unit struggled to generate a consistent push upfront when he was out of the lineup.

Should Dotson be fully recovered and healthy in 2022, I am excited to see what the interior of the OL may look like with James Daniels and Mason Cole added to the unit this offseason. Cole should be more of a consistent, dependable player at center compared to Kendrick Green at worst. As for Daniels, he has been touted as a young, talented player that excels as a run blocker and has the traits to be a capable pass protector as well. Pairing him with Dotson inside could create a duo at the guard spots that resemble the two guys from the movie The Replacements, having that bouncer-like feel where they will literally throw guys out of the club with their strength and physicality.

This isn’t to say that Dotson and Daniels will match the play of Ramon Foster and David DeCastro like several years ago, but rather that the interior OL should be much improved from last season, should Dotson be fully healthy. Pair that unit with Cole who does a good job at moving in space at center, and Pittsburgh should see improvement in the running game in 2022, specifically in-between the tackles. Here’s hoping Kevin Dotson can capitalize on the flashes we have seen the first two years of his NFL career and form a dynamic duo at guard with Daniels along the Pittsburgh OL for years to come.

Daniels and Cole bringing much needed experience. With Najee Harris' comments, no wonder this o-line was a mess last year. #Steelers https://t.co/pGqXsOzvOB

What are your thoughts on Kevin Dotson in 2021? Do you think his impact was limited due to fighting the injury bug all season? Do you think that he can finally take the leap in 2022, or that he won’t be anything more than a mediocre spot starter caliber player? Are you excited about the pairing of Dotson and Daniels at guard? Please leave your thoughts in the comments section below and thanks again for reading!