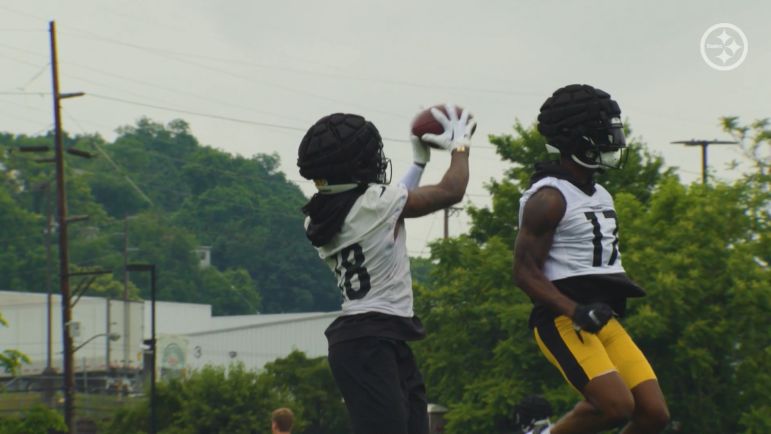 The old saying is that time heals all wounds, but in the case of Pittsburgh Steelers’ veteran wide receiver Anthony Miller, time has actually…made him better?

That’s the belief that Miller, 27, is leaning into these days, after going through some significant career changes that saw him traded and released in the same season, before then being stashed on the practice squad in Pittsburgh on a roster relatively deep at the receiver position.

Still, with four seasons under his belt and a chance to step back and observe and learn the position further, Miller believes he’s better than he’s ever been ahead of his fifth season and is aiming to show just what he’s learned in the slot as he attempts to make the Steelers’ 53-man roster this summer in Latrobe at Steelers’ training camp at Saint Vincent College.

Speaking with the Pittsburgh Tribune-Review’s Chris Adamski during minicamp in early June at the UPMC Rooney Sports Complex on the South Side, Miller talked about being able to take that step back and learning from observing, putting him in a better position now to show his true talents in the slot.

“I feel like I’m better than I was before,” Miller said to Adamski, according to original reporting from the Steelers’ beat reporter. “I feel like I’m more mature in my career within my position and also on the details of playing the game. Now I think I’ve sharpened those up, and I’m ready to go out there and play the best I can.”

Miller will have to be better than he’s been before, especially in the slot, where he faces an uphill climb to make the roster at the position behind the likes of rookies George Pickens and Calvin Austin III, third-year receiver Chase Claypool, free agent signee Gunner Olszewski and more.

Having that experience at the NFL level should help Miller in his battle to make the roster though, having hauled in 140 passes for 1,589 yards and 12 touchdowns in 50 career games.

“My whole career, I’ve played in the slot,” Miller said to Adamski. “I’ve had a lot of success in slot, and I feel like I have learned even more about the slot position, even after not playing last year. I got to sit back and observe some guys and watch them from afar, and I definitely appreciated that and now get to implement what I saw.”

Now, with Smith-Schuster in Kansas City and McCloud in San Francisco, a real opportunity has presented itself to the former second-round pick out of Memphis in Miller.