With teams reporting to training camp less than a month from now, ESPN is taking one last look at each roster in the leadup to the start of the season. A Wednesday article examined the strengths, weaknesses, and X-Factor of each team with a late-June set of power rankings.

The Steelers ranked 22nd overall, an uncommonly low place for them to be. But it’s been an offseason of change, starting at quarterback, in a competitive AFC North.

Author Ben Linsey called the Steelers’ pairing of T.J. Watt and Cam Heyward the roster’s biggest strength and lauded both player’s ability to take over games. Watt and Heyward were recently named the #1 defensive pairing in football. Watt is coming off a record-tying year with 22.5 sacks, equaling Michael Strahan’s mark, while Heyward played arguably his best football in an otherwise difficult year for the Steelers’ defensive line. Both should continue their dominance in 2022.

Predictably, Linsey cited the Steelers’ offensive line as the team’s biggest question mark. While quarterback is right up there, it won’t matter who is under center if the line can’t block for him and for RB Najee Harris, who the offense will center around. Pittsburgh added James Daniels and Mason Cole as new starters and will bank on development from second-year tackle Dan Moore Jr. and third-year guard Kevin Dotson, who missed the back half of 2021 with a high ankle sprain. How that unit performs individually and collectively will determine how much improvement this offense makes.

But most interestingly, Linsey cited CB Ahkello Witherspoon as the team’s X-Factor for the season. Explaining the rationale, he writes:

“The two-year, $8 million contract Ahkello Witherspoon signed to remain in Pittsburgh this offseason doesn’t scream No. 1 outside cornerback, but that’s what the Steelers are counting on him to be when looking at the rest of their roster. From Week 13 through the end of the season, Witherspoon allowed a passer rating of just 20.2 on throws into his coverage.”

Witherspoon was brought back on the same deal CB Levi Wallace inked. Wallace was signed first, potentially signaling Witherspoon would leave, but he signed days later. Witherspoon went from afterthought to become the team’s best cover corner down the stretch last season, but will have to prove his consistency over a full 17-game season. The biggest knock on him has been a history of up-and-down play, showing signs of getting his career on track before fading. The configuration of Steelers’ corners is a little unclear with Witherspoon, Wallace, and Cam Sutton, but Pittsburgh has solid depth here.

ESPN also listed out a Steelers’ starting depth chart with PFF rankings. WR Diontae Johnson, TE Pat Freiermuth, and OG James Daniels earned top grades on the Steelers’ offense last year (Daniels of course was with the Bears), while Heyward and Watt scored big defensively. Of course, these rankings also have Minkah Fitzpatrick with one of the worst grades, even lower than counterpart Terrell Edmunds, so all of it should be taken with a grain of salt. 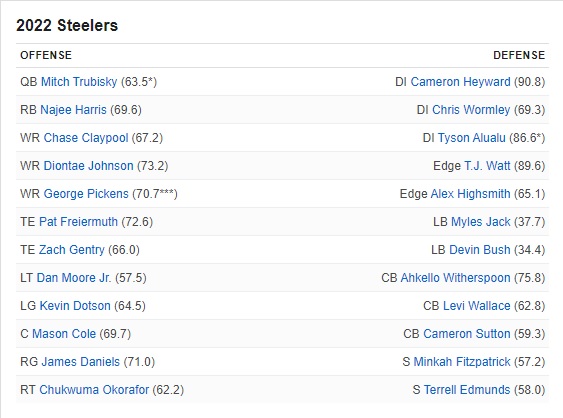