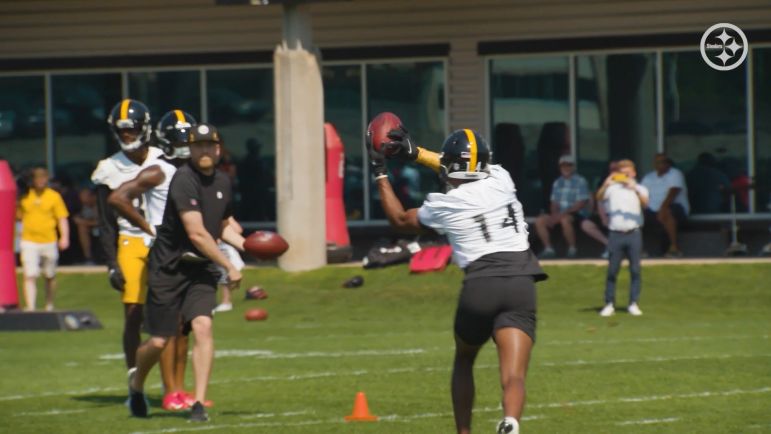 Gone is Ben Roethlisberger, the final piece of anything resembling a Super Bowl in the Steel City. With him out the door goes a boat load of big game experience, as he brought not only that elusive “One For The Thumb” Super Bowl title, but also captured another in the 2008 season. He even led the team to a third, although they fell short in 2010 to the Packers. The point is, that’s a ton of invaluable experience, both on and off the field, that walked out the door when Big Ben hung up his cleats this past January.

For the first time in 18 seasons, the team will enter uncharted territory at the QB position, with both free agent signee Mitch Trubisky and first-round draft pick Kenny Pickett embattled for the top spot as OTAs commence and we approach training camp. Who will step up and lead the youth movement on offense? Pro Bowl running back Najee Harris has been on record saying he’s ready, but he doesn’t appear to be alone, as wide receiver Diontae Johnson is ready to lend a hand in filling that role, especially in a receiving corps which has also undergone a makeover this offseason. However, as Harris wants to take on more of a vocal role, DJ appears poised to let his play on the field do the “talking”.

“Like I said before one time, I’m not a vocal leader, I’m just gonna lead by action and let my play do the talking,” Johnson said earlier on 93.7 The Fan. “I’ll talk here and there, just to give pointers or not to the rookies or whatever, or whoever asks a question. But other than that, I’m just trying to lead by example.”

Those aforementioned rookies consist of draft picks, George Pickens of Georgia and Calvin Austin III, who were selected in the second and fourth rounds, respectively, in this year’s draft as the team looks to replace JuJu Smith-Schuster and James Washington, who were lost to free agency. Both offer different skill sets, as Pickens is your prototypical X-receiver, who uses his 6-foot-3 size and sure hands to offer a tremendous catch radius. Austin, meanwhile, is much smaller at only 5-foot-8, but offers 4.32 barn-burning speed, and if a bad tackle angle is taken on him in space, it’s likely six points for Pittsburgh.

Under the watchful eyes of veterans Chase Claypool and Johnson, who could be considered the “old man” of the receiver room as he enters year four (hopefully with a new contract), he’s noticing how quick the youngsters are soaking things up under his guidance. And he’s there to help because just a short time ago in 2019, he was in their exact position as a third-round rookie.

“I see they catch on real fast and they’re watching the older guys, they’re picking our brains to see what they can add to their toolbox as well. Just being able to be around them and help them out and just make them feel comfortable. It’s just good just to be in this spot because I was in their position.”