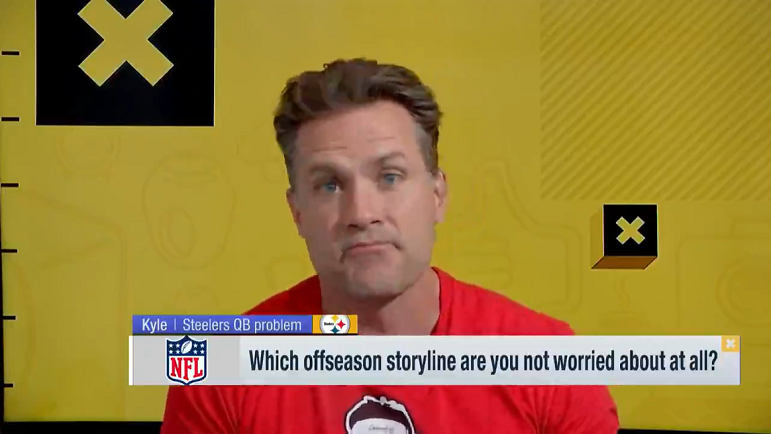 All the talk about the uncertainty and the general doubt of the direction the Pittsburgh Steelers are heading in has the future of the black and gold appearing rather grim, at least from the general consensus.

After 18 years of Ben Roethlisberger, the fate of the Steelers seemingly rests in the hands of Mitch Trubisky and Kenny Pickett under center. For some, that’s grim outlook. For others, there’s a chance for the Steelers to get back to their traditional ways of smash mouth football and suffocating defense.

In the end, whomever is under center won’t matter, because the Steelers just win games under head coach Mike Tomlin, Brandt said.

KB isn't worried about the @steelers. Are you? pic.twitter.com/CBwXUkzVkC

“So you guys know on this show, I don’t have too many guardrails that I abide by, but one of the ones that I will never drive through ever is any consistent, authentic doubt of the Pittsburgh Steelers,” Brandt said, according to video via NFL.com. “And my storyline is just that the Pittsburgh Steelers are into the uncertainty now and they’re not gonna be able to win, and they lost their Hall of Fame, quarterback in [Ben] Roethlisberger, and they’re in transition for the first time and feels like 20 years. I don’t really care.

“It looks like it’ll be Mitch Trubisky. Maybe it’ll be Kenny Pickett. At some point, whoever it is, the Steelers will win. They will win,” Brandt added. “That’s what they do. That’s what Mike Tomlin does. They were on the doorstep of the playoffs with Mason Rudolph at quarterback. They were in the playoffs with 2021 Ben Roethlisberger at quarterback. Ben Roethlisberger was not himself. He was not even close to himself and they’re still in the playoffs. It’s just kind of what they do.”

It is what the Steelers do under Mike Tomlin. People will continue to roll their eyes at the 15 years without a losing record thing with Tomlin, but it’s real, and in the grand scheme of things, it matters. Having a .500 or better record every single season, regardless of who is on the roster, means you’re in contention for the playoffs. Once a team gets into the playoffs, anything can happen.

Of course, the counter argument to that could be that Roethlisberger covered up a lot of holes on every team he was on, and there’s certainly some creedance to that argument. But the 2019 season showed a lot for the Steelers and Tomlin, as Pittsburgh was in contention into the final week of the season with Mason Rudolph and Duck Hodges under center.

What other franchise is doing that in today’s NFL? Honestly.

For Brandt, even if it is Trubisky under center for the Steelers in 2022, he still believes heavily in not only the black and gold, but Trubisky as well.

“If you wanna look at Mitch Trubisky fine, and you want to joke about the MVP Nickelodeon, that’s fine. Go ahead and do what you do,” Brandt added. “He has a better record as a starter in this league than Deshaun Watson, who is now one of his division rivals, I think? I just know this, come on the air and say this: Pittsburgh’s gonna take a dip and they’re gonna go seven and 10 this year, six and 11. Don’t say it. It won’t happen. I have blind faith in the Mike Tomlin experience, that defense and whoever they have a quarterback that they will win games and they will matter. They always do.”

Hard to argue against Brandt here, honestly. It’s not like the entire franchise walked off into the sunset with Roethlisberger in retirement.

T.J. Watt, Cameron Heyward and Minkah Fitzpatrick remain on the defensive side of the football, while names like Najee Harris, Pat Freiermuth and Diontae Johnson still exist offensively. In the second year of Matt Canada’s scheme on offense, with quarterbacks that fit his system much better than Roethlisberger did, there should be a noticeable jump from the offense in 2022.

With a better offense overall, especially hopefully in the trenches, and some newfound health defensively with added playmakers in Myles Jack and Levi Wallace, Pittsburgh should be in the mix once again.