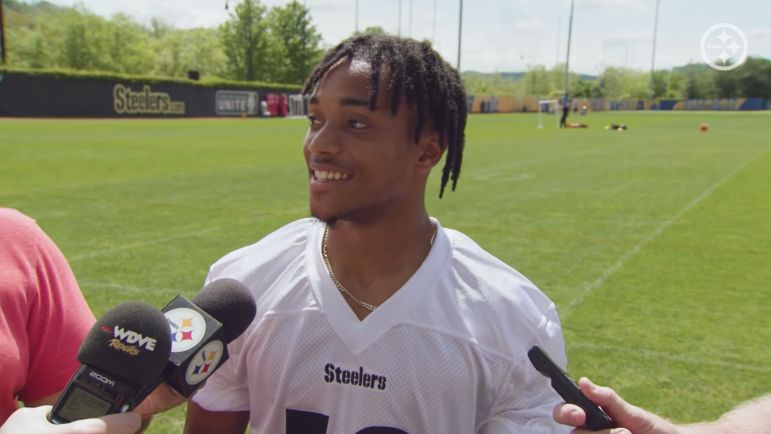 One of the most ubiquitous habits of college scouting is the ‘pro comparison’, when you attempt to draw similarities between a college prospect and a player in the NFL whom you believe that player can be like. When the Pittsburgh Steelers drafted Diontae Johnson, the pro comparison was Antonio Brown.

That hasn’t really been wrong. A lot of the similarities that we saw in college did translate into the NFL. Now especially since he’s been drafted by the Steelers, many people have been comparing fourth-round rookie Calvin Austin III to Johnson, including the beat reporters who had the opportunity to ask him questions during this week’s OTAs—even if he attempted to assert some independence from it.

“I would say we definitely have some similarities in our game as far as our quickness and shiftiness, but I feel like I’ve got my own type of game”, he told reporters when he asked if he saw himself in Johnson’s game, audio via 93.7 The Fan. “But like I said, from watching him, there’s definitely stuff I can learn from him”.

“One of the things I want to work on is getting out of my breaks. That’s something that he does very well”, he added, and that is probably Johnson’s signature characteristic, something he does about as well as anybody in the NFL. “So it’s just about watching the older guys and just stealing stuff from each of them and learning, just to put it in my game”.

There aren’t many ‘older guys’ left, with JuJu Smith-Schuster, James Washington, and Ray-Ray McCloud leaving in free agency, which is why the Steelers drafted Austin and George Pickens, their second-round selection. In addition to Johnson, there is Chase Claypool, though they also have Miles Boykin, Anthony Miller, and Steven Sims, all of whom also have meaningful NFL experience, even if they have a combined one reception in Steelers uniforms.

One thing Austin does bring to the table is not just quickness and shiftiness, but real, genuine speed. Not only did he time out at a 4.32 in the 40-yard dash at the Combine, he also shows that speed in his college film from Memphis. Not everybody with a great 40 time has the same play speed, but he does.

He has to, since he’s not going to blow anybody away with his 5’8”, 170-pound frame. Speed, quickness, and shiftiness are how he’s going to win in the NFL. I’m sure he’s plenty strong for his size, but this league has some big and physical cornerbacks these days. He’s not going to win a lot of reps through contact.

And that’s okay, as long as he harnesses his full repertoire of tools. For the moment, he’s observing veterans on the roster to see what he can add to his own toolkit—and, indeed, Johnson’s toolkit isn’t a bad one to pilfer from, especially for somebody who’s, uh, not even my size.