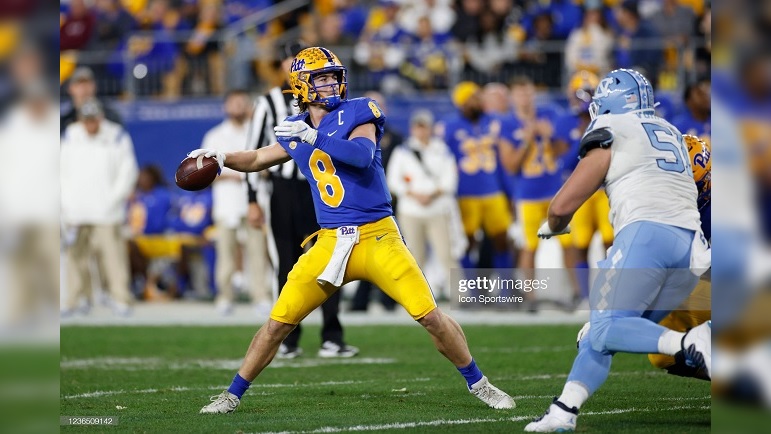 It might look a bit different to outsiders, but for Pittsburgh Steelers’ rookie quarterback Kenny Pickett, wearing two gloves as a quarterback is something that the former Pittsburgh Panthers’ star quite enjoys, which also happens to bring him a lot of comfort throwing the football.

Historically, quarterbacks like to directly feel the pigskin against their throwing hand, giving them the best grip possible while being able to spin the football and really control it overall. Of course, that tends to go out the window in bad weather. For Pickett though, even with questions regarding his historically-small hand size for the position, the gloves provide comfort for him as a passer, rain or shine.

Appearing on the Pat McAfee Show Tuesday afternoon, Pickett discussed the use of two gloves as a quarterback, stating that it’s something he enjoys and just decided to stick with after a game against the North Carolina Tar Heels.

“I did it once my sophomore year, but really after that North Carolina game, I stuck with it after that game,” Pickett said to McAfee, adding that it largely had to do with the attention gained from an appearance on McAfee’s show led to the decision. “After that game, I kind of stuck with it. Coach Whipps [Mark Whipple] said like, ‘you know, it doesn’t have to be cold to rock the gloves.’

“So I wore then since then on out,” Pickett added, according to video via the Pat McAfee Show’s official YouTube page. “So you know, it worked out well that game, it just kind of felt more comfortable, stuck with it. I mean, I feel great throwing the ball in the NFL too. So it’s just kind of something that I enjoy and I just feel more comfortable with.”

"After that UNC game that you called I stuck with the gloves.. it just feels more comfortable & I feel great throwing the ball" ~@kennypickett10#PMSLive pic.twitter.com/cH8KeYnbM0

Pickett is referencing the UNC game from this past season in which the Panthers won in a downpour at Heinz Field, sparking the two gloves from the star signal caller. He wasn’t the first quarterback to don two gloves though, and he won’t be the last.

Of course, Ben Roethlisberger would wear two gloves at times, as would names like Peyton Manning, Teddy Bridgewater, and even Kurt Warner. There’s three Hall of Fame quarterbacks there. Maybe they’re on to something.

If Pickett can continue to sling the football like he did at the University of Pittsburgh at the NFL level, it won’t matter that he wears two gloves or has small hands. All that will matter is the production he puts up on the field. That really should be the talking point with the Heisman Trophy finalist as he prepares to embark on his NFL career, rather than how he looks on the field.