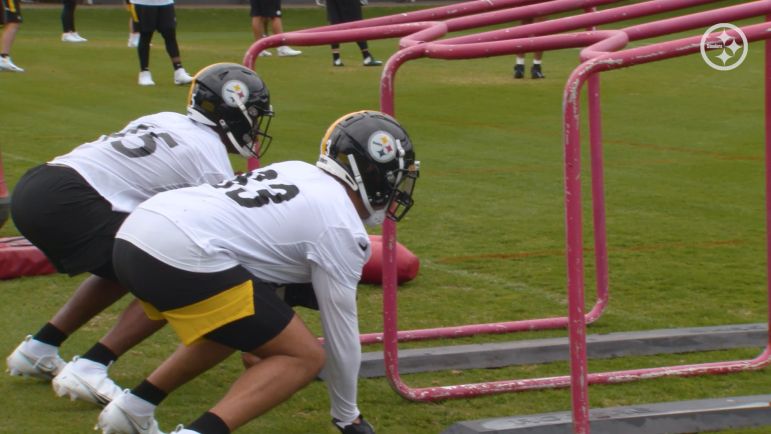 The Pittsburgh Steelers currently have two fullbacks or fullback-like players on their 90-man roster following the 2022 NFL Draft, during which they used a sixth-round draft selection on Connor Heyward out of Michigan State.

Heyward, the younger brother of All-Pro defensive lineman Cameron, is listed as a tight end and is working in the tight end room and with the other tight ends, but his ultimate role, assuming that he ever earns one, will more resemble that of an H-back, including serving as a lead blocker out of the backfield.

But the Steelers already have one of those, Derek Watt, whom they don’t use much in that capacity. While Watt was signed primarily to play special teams, they could certainly find at least 100 snaps for him if they really wanted to. So is this an indication of a changing of the guard?

“It’s the comparison, he’s the younger guy coming in to take my role. It’s not what it is”, he recently told Joe Rutter of the Pittsburgh Tribune-Review during OTAs. “He’s a great kid. He brings a lot to the table, and he’s with the tight ends. He’s trying to find a role in this offense for himself. I’m trying to expand my role. We’ll see what happens”.

Watt played under 100 offensive snaps in each of his first two seasons with the Steelers. He is hoping that he sees more time than that in year three, now with Ben Roethlisberger retired and bringing in less experienced quarterbacks, and behind an upgraded offensive line, with a Pro Bowl running back going into his second season.

But they’re not going to have two lead blockers lining up in the backfield. And only one of them is under contract for 2022. So even if Heyward might not take over Watt’s role this season, who’s to say that the middle Watt brother will be brought back beyond his current contract?

Well, this season will have a lot to do with that, perhaps. If Heyward looks like he needs to be on the field, then they’ll have less use for Watt—and here, I’m talking about Heyward also contributing on special teams, which, again, was a major reason that they drafted him.

It’s hard to talk about Watt and Heyward and not, to at least some degree, frame it as some kind of competition. They’re not currently working within the same position group, but everybody knows Heyward isn’t going to wind up being a true tight end, regularly carrying out in-line blocking assignments.

Of course, there’s always the very distinct possibility that neither of them contribute much on offense, and just serve as core special teamers.