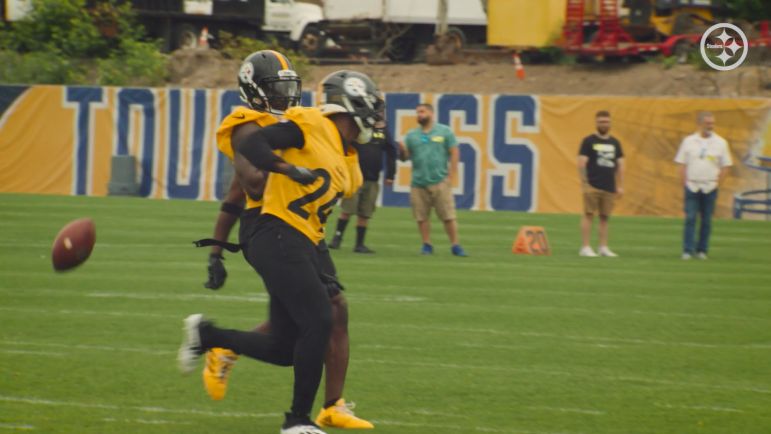 Even though the Pittsburgh Steelers return both starting safeties from the past three seasons, there were times during the offseason that it looked as though that might not happen. While Minkah Fitzpatrick is gearing up to become perhaps the highest-paid safety in the history of the game, fellow starter Terrell Edmunds bided his time in free agency before returning on a one-year deal to set himself up for free agency again next year.

The Steelers did, however, explore their options as alternatives during that time, and they even eventually signed one of them, inking sixth-year veteran Damontae Kazee to a one-year contract shortly after the 2022 NFL Draft.

Fitzpatrick has been a regular presence during the team’s offseason workouts, but he has not necessarily always been in the drills—particularly the team drills. That has given others the opportunity to step up and work with the first-team defense, and Edmunds believes one player above all was most rewarded for the circumstances.

“I would definitely say Kazee” benefited the most from Fitzpatrick’s time as an observer, he told reporters yesterday as minicamp wrapped up, “just because he came from a different team, so he got those extra reps. He got a chance to be out there and feel the communication”.

A former fifth-round draft pick of the Atlanta Falcons, Kazee was installed as a starter by year two, and spent four years in Atlanta before signing with the Dallas Cowboys last offseason. A bye-week arrest for DWI torpedoed his free-agency prospects for a second year in a row after a COVID-driven cap plunge did the same in 2021.

With 12 interceptions in his career, including two last season in Dallas (that’s only one fewer than Fitzpatrick has in his career in 10 fewer starters), Kazee brings some play-making potential with him in the secondary, and the Steelers coaching staff has talked openly about looking to find him a role—even leaving open the question of his potentially challenging Edmunds for the starting job.

“He got the chance to go out there and make plays, and he did a good job”, Edmunds said of the newest member of the secondary. “He came out there, he helped us out. He got his communication skills on our lingo, and he just went out there and made some plays for us”.

There’s never been such a thing as too many splash plays, so the more playmakers the coaching staff can find to place into their defense, the happier they’ll be. Edmunds hasn’t historically been much of a playmaker, even if he has taken some strides in that department, If Kazee wants to make an impact and find playing time, he’ll be finding the ball—which he already has.