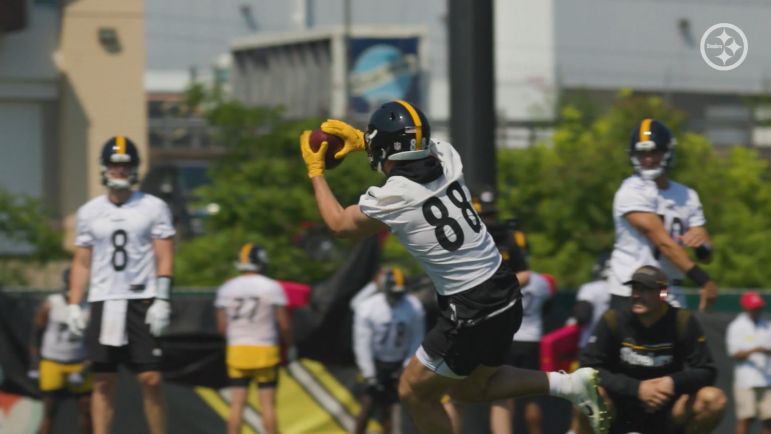 The Pittsburgh Steelers used a draft pick earlier than the fifth round on a tight end last year for the first time since 2007, using their second-round selection to select Pat Freiermuth out of Penn State. He caught 60 passes during his rookie season for 497 yards and seven touchdowns, while showing developmental blocking abilities, his trademark being his catch radius and reliable hands.

He impressed his teammates during practice sessions throughout the offseason last year, and now this class of rookies are seeing what he is preparing to do as an encore. He has certainly caught the eye of sixth-round pick Connor Heyward, who is watching him closely and learning.

“I think Pat’s an elite tight end. I think he’s gonna be one of the best tight ends in the league, if not the best, when that time comes”, he said yesterday, via 93.7 The Fan. “I think he’s a top tight end right now. He’s a complete tight end, can catch, run, block. And he’s just smooth. His catch radius is crazy. I just always let him go and I’m in the back of the line, so I get to see how he works every day, and he works hard. We have fun with it, though, too”.

The Steelers were in a transition at the tight end position last year with the retirement of Vance McDonald, and Eric Ebron going into the second year of his two-year contract he had signed the offseason prior.

While Freiermuth and Ebron began the season labeled as co-starters, the rookie gradually began to seize the role for himself, and even more was placed on his plate once the veteran suffered a season-ending knee injury, leaving Freiermuth and Zach Gentry to shoulder the load.

While Freiermuth and Gentry both came along nicely last season in their first years of contributing meaningfully, the Steelers are hoping that Heyward can add to the mix as a contributor who can wear many hats, though he is beginning his training solely in the tight end room.

As for the Penn State alum, he knows what he has to work on in his game, as he has talked about it a number of times this offseason, discussing his physicality on the line of scrimmage and his in-line blocking, as well as his ability to create yards after the catch.

He does have a way to go to catch up to the elite tight ends of the day, particularly as a receiver. There were 18 tight ends who finished with more yards than him last season, and 12 with as many or more receptions. He did finish seventh in touchdowns at the position, finding a home in the red zone.

But he also had the third-highest reception percentage among all tight ends with at least 400 receiving yards at 75.9 percent, trailing only C.J. Uzomah (77.8) and Gerald Everett (76.2), both of whom had fewer receptions, yards, and touchdowns than he did. With a more well-rounded target usage in 2022, he can hopefully round out those numbers and maybe even get somewhere close to the George Kittles and Darren Wallers and Dallas Goederts of the world.