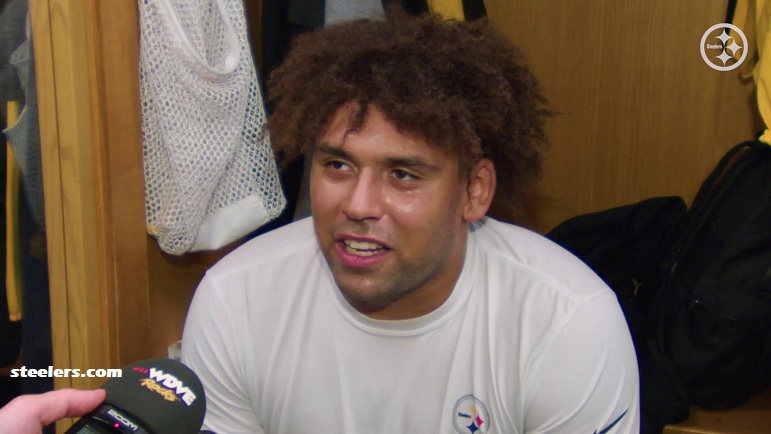 When making a position switch at the big league level, many players are hesitant, scoffing at the idea or simply taking it with a grain of salt. A lot of today’s players have been primarily playing that same position since they were in Pee Wee’s, so to ask them to change can sometimes be a bit of a jolt. However, the NFL’s famous moniker is “Not For Long,” so players usually accommodate their coaches’ wishes. After all, these guys work with the best athletes in the world, so they should know a square peg skillset could be best utilized somewhere else.

Sixth-round rookie fullback/tight end Connor Heyward fits into that category, as prior to his senior season at Michigan State, he made the switch from a full-time running back to tight end in preseason camp, and had success. Drafted as a “Swiss Army Knife”-type of player, when he’s not playing on one of special teams coordinator Danny Smith’s units, he’ll be employed in a hybrid H-Back role, whether that’s lining up in the backfield at fullback, or with his hand in the dirt along the line. However, it’s clear wherever he’s asked to contribute, he knows what comes most natural to him.

“I felt catching the ball was my natural thing and I’m glad that I made the switch to this tight end/hybrid role so that I can show everything I can do catching, running and blocking,” Heyward said earlier on Steelers.com.

He put that on full display during the team’s two-minute drills yesterday at OTAs, catching several passes that were thrown his way by fellow rookie QB Kenny Pickett, and even had a reporter quote him as being “Kenny’s go-to guy.” Unlike some athletes that were asked to potentially change positions, like Ravens QB Lamar Jackson, who was asked by many scouts to perform wide receiver drills at the NFL Combine and declined, Heyward has embraced his new-found role. Of course, the talent on-hand for the Spartans played a role, with the incoming transfer of Kenneth Walker III from Wake Forest, who won the Doak Walker Award last season and was drafted by the Seahawks in the second round of this year’s draft.

“No, I was happy about it actually, I played running back all my life, but I played a lot of different positions. So when we got Ken Walker, I knew he was a hell of a player and the best back in draft this year. So, I knew what my role was gonna be. I’m glad that the coaches realized that as well or else I wouldn’t be in that position.”

The position he’s now in is an envious one, as not only will he get a chance to play meaningful snaps for a decorated franchise like the Steelers, but he’ll also get to do so alongside his big brother, All-Pro defensive tackle Cameron Heyward.