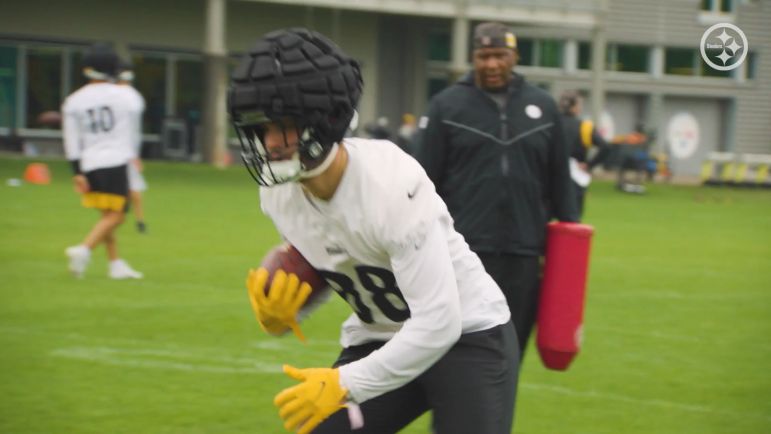 While the NFL is frequently charged with placing financial considerations over everything else, and only paying lip service to the notion of safety when it is in their best interests (or that of their bank accounts’), they did implement a new offseason policy this year regarding the wearing of protective gear to help reduce the incidence of avoidable head injury.

As we’ve covered earlier this week on the site, it is now mandated that players were Guardian covers over their helmets, which are designed to limit impacts. While they are not exactly icons of trend-setting fashion, they do serve their purpose, and for that, most have been on board with it. Especially players like Pat Freiermuth.

“I like them just because of my past with concussions. I kinda like the extra protection”, he told Mike Prisuta recently, as quoted by the reporters for an article on the team’s website. “We definitely look dumb but it’s good protection”.

As pro-player safety as I am (and I think my track record over the past nine years of writing on this site has made that very clear), I do concede that these helmet coverings do, indeed, make players look “dumb”. I was grabbing screenshots for the first practice of their use recently and I audibly sighed thinking of how dumb the header images in my article are going to look.

But that’s okay. There are a lot more important factors to consider. A young player like Freiermuth, who suffered not one but two concussions during his rookie season alone, would understandably be in favor of helping to reduce the chances of him suffering another.

While this extra padding will not help in-game, since they won’t be worn except on the practice fields at certain portions of the calendar, they have been proven to reduce the force of impact, and the more protection offered for players, the better.

Aesthetics are not what practice is about, after all. Neither are the games, for that matter, but, of course, the league wants to put together a visually pleasing product. They have worked to make game helmets safer, as well, which remains an ongoing process.

There is still a lot we don’t know about the long-term impacts of concussions, but there’s enough to go on that we should be concerned about it. Looking a little dumb on the practice field, I think, is a small price to pay, even in rigidly practical terms. I’m sure none of you want to see Freiermuth missing any practice time or game time because he’s in the concussion protocol.