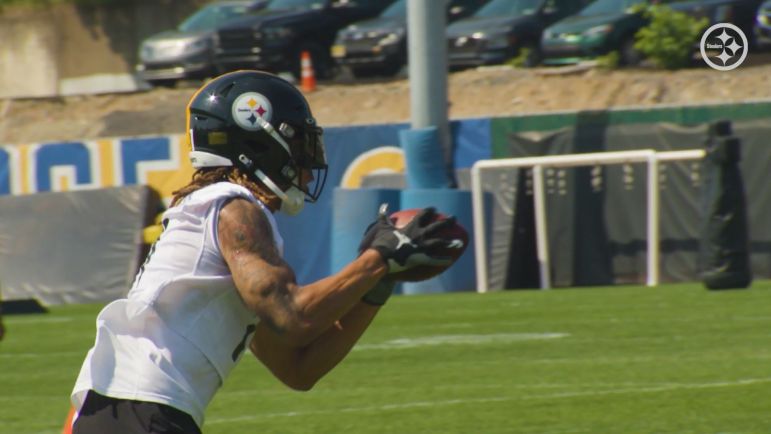 The Pittsburgh Steelers weren’t expected to do much during Chase Claypool’s rookie season in 2020. From one perspective—they didn’t advance in the postseason—they didn’t. But they still went 12-4 during the regular season, a record that included a franchise-best 11-game winning streak to start the season.

Pittsburgh was met with low expectations last season, as well, and again, they reached the postseason, while many predicted Mike Tomlin’s first losing season. Didn’t happen. And it won’t happen this year, either, according to Claypool—nor will it any time soon.

Asked if the 2022 season was a rebuilding year while appearing on the I Am Athlete podcast recently, he told his hosts, “We’re gonna have a rebuild year at one point, but it’s not gonna be any time in the next 10 years, I don’t think”.

Former Steelers general manager Kevin Colbert always said that the Steelers never rebuild, they reload. They’ve had to do a lot of reloading this offseason, spurred on by the retirement of quarterback Ben Roethlisberger. The departure of a franchise quarterback very frequently signals a rebuild, but this roster has no intentions of packing it in and settling for the future as opposed to the present.

“So I think we’re winning…13?”, he added, having been asked if he felt they would have a winning record by winning at least nine games. Pittsburgh most recently won 13 games in 2017, but of course, since then, the NFL has added a 17th game, making it a lot easier to win 13, so the last time they won 12 was, as we already said, in 2020. In fact, they have won at least 12 games five times under Tomlin.

But can they win 12+1 in 2022? With a new quarterback being worked into the system? With an offensive line that is still a work in progress? With a defensive line that, where not in transition, is rapidly aging, even coming off of major injury? With an inside linebacker core that is suspect? With largely unproven wide receivers?

Sure. They could. Tomlin’s Steelers always seem to outperform low expectations, even if 13 wins is ambitious. A lot of things do have to go right, of course, as would be the case in any 13-win season, but this is still a roster that possesses a lot of talent on both sides of the football.