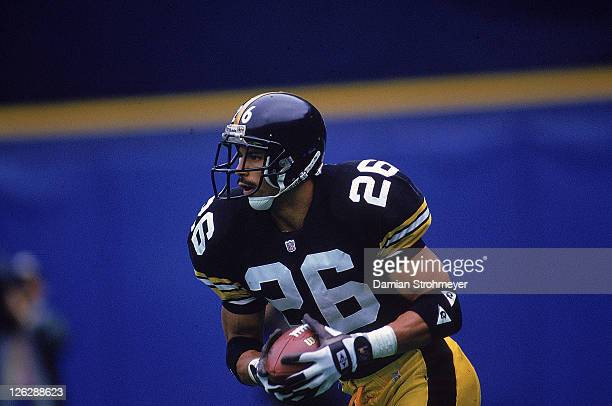 Some high praise from CBS who in a recent article, ranked the top ten defensive players in NFL history. Author Jeff Kerr included Rod Woodson into the ninth spot, one ahead of Hall of Fame safety Ronnie Lott. Spoiler alert, here’s his top ten.

“Not only was Woodson one of the best cornerbacks of his era, but he was one of the best safeties of his time when he transitioned to the position full time in 1999. Woodson earned 11 Pro Bowl appearances and six first-team All-Pro selections in his Hall of Fame career, the final one coming at age 37 when he had eight interceptions as a safety (which also led the league).

Out of Purdue, Woodson was drafted tenth overall in the 1987 NFL Draft. He didn’t see the field a lot his rookie year, working primarily in the return game. But he ramped things up in 1988, starting all sixteen games and picking off four passes. He found the end zone for the first time in his career, a kick return score against the Phoenix Cardinals.

By 1989, Woodson was a Pro Bowler and All-Pro, an absolute ballhawk and dangerous man with the football in his hands on interception returns or in the return game. He picked off three passes and led the league in kick return average with another score. Woodson is one of the best athletes in franchise history and a few years ago, we ranked him as the third-fastest Steeler in history (and you could argue he was #1) and as an overall athlete, he might claim that top spot.

He was also a competitive warrior, tearing his ACL in 1995. For most, especially then, that was an automatic season-ending injury. But Pittsburgh kept the door open for Woodson and he returned for the team’s Super Bowl against the Dallas Cowboys.

Kerr does a good job outlining Woodson’s career numbers. Unfortunately, not all of that came with Pittsburgh. He left after the 1996 season, spending one year in San Francisco before ending his career in Baltimore and finally, Oakland.

Though it’s great to see Woodson on the list, it’s surprising that Joe Greene is nowhere to be found. It’s difficult to put together a top ten of the greatest of all-time, and don’t ask me who you’d take off (some will take issue with Aaron Donald at #5, and that’s a reasonable take). But Greene was the Aaron Donald of the 70s. Had it not been for a shoulder/nerve injury, Greene’s career would’ve been even more dominant.

In a slightly different scope, in our Steelers Depot Top 100 Steelers’ list several years ago, we named Joe Greene the #1 player in team history. Jack Lambert came in at #2, Mel Blount #3, and Troy Polamalu #9. In fact, Woodson didn’t appear until #14, though again, that was strictly based off his Steelers’ career whereas this list is looking at his entire body of work.

Despite Green’s snub, it’s a pretty solid list from Kerr overall and undoubtedly a difficult task to put together and get 100% “right.”