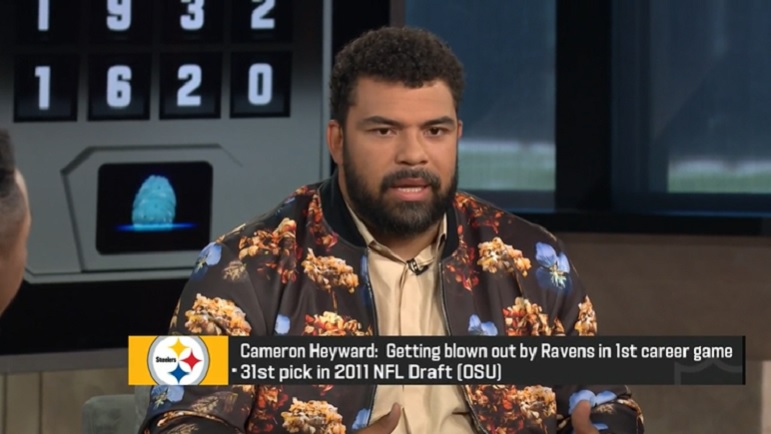 In a Thursday appearance on NFL Total Access, Cam Heyward explained his “Welcome to the NFL” moment. In fact, he had two of them.

His first one came right away, his very first game, getting a taste for what the Steelers/Ravens rivalry is like.

“We were playing the Baltimore Ravens after just coming off the Super Bowl,” Heyward said. “So all the guys are hyped. We went into the game. I’m like, ‘yeah, maybe I’ll get to play.’ I’m not starting at the time, but I’m like, ‘I’ll get in there.’ We get out there. They smoked us. They laid the law down. Like Haloti Ngata came out and closed-line Rashard Mendenhall.”

Pittsburgh got blown out by Baltimore in the 2011 season opener, losing 35-7 to the Ravens. Baltimore jumped out to a 21-7 halftime lead and never looked back as the Steelers turned the ball over a whopping seven times, including three interceptions by Ben Roethlisberger. Ed Reed picked him off twice that day. Pittsburgh was ultimately swept by the Ravens that season, falling 23-20 in the rematch, making up half of their four regular season losses that year.

Heyward was no longer at Ohio State with the Buckeyes’ team being the squad to beat. And it was a rude welcome to what the NFL is all about. The pro game offers zero margin for error.

Heyward’s second “welcome to the NFL” moment is a story he’s told before but one too good not to share again.

“We’re playing Indianapolis Colts, primetime TV. It was a heck of a game and they put me in the third quarter, I went in for like a series or two and then I’m coming off the sideline I tripped and I fell right in front of Mike T. I had turf pedals coming down my face. And Mike T’s like, ‘you gonna get out the way?’

Unfortunately, we don’t have any footage of that moment. But Heyward would probably prefer it that way. As for “welcome to the NFL” moments, that one is pretty embarrassing, but luckily for him, the only two people who probably remember it are himself and Tomlin. It’s not a moment that will live on TV for the rest of time.

It all got better for Heyward from there. He’s become one of the best defensive linemen in football and still has an outside shot at the Hall of Fame with the current late pace he’s on. He’ll at least go down as one of the best linemen in Steelers’ history, right up there with Joe Greene, and will likely pass him in career sacks. An incredible career that started with very humble beginnings.