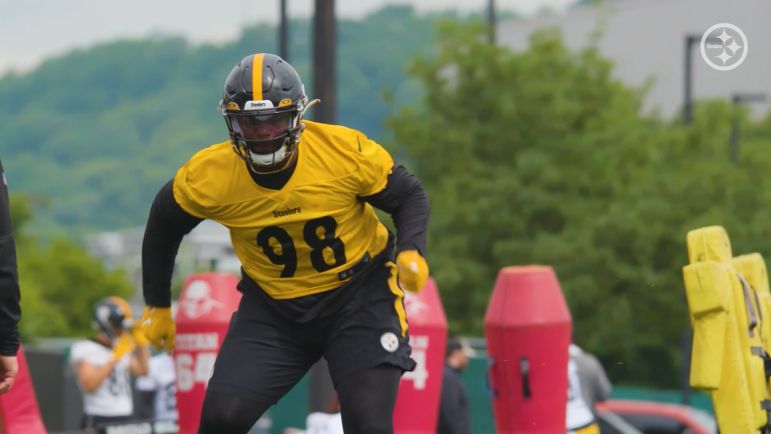 Topic Statement: DeMarvin Leal will be a healthy scratch (assuming he’s healthy) for the majority of his rookie season.

Explanation: Even though the Steelers drafted a defensive lineman in the third round, DeMarvin Leal’s path to playing time isn’t so straightforward. Indeed, there’s no sure bet that he will even have a consistent helmet on Sundays.

Depth charts determine opportunity more than talent, even if the latter helps to determine the former. DeMarvin Leal is starting out on the bottom of what is already a deep group. Even taking Stephon Tuitt out of the equation, the Steelers added Larry Ogunjobi, making the numbers distinction a push.

Ogunjobi will be dressing, as will Tyson Alualu and Cameron Heyward, at a minimum. One of Chris Wormley or Isaiahh Loudermilk, again, at a minimum, will be dressing. The only way Montravius Adams doesn’t dress as the number two nose tackle is if he doesn’t make the 53-man roster.

That’s six guys already for what is almost always five gameday helmets. Leal is sitting at seven. To have even the remotest chance of dressing at all this season for reasons that don’t pertain to others being injured, he’s going to have to make up more ground than a non-first-round rookie typically would. Bet the under in terms of games dressed for the Texas A&M product. It’s not his fault he was drafted where the Steelers are deep.

Depth charts have a funny way of sorting themselves out—or being sorted out by force. In the past, the Steelers have taken advantage of abundances at positions to move a player in exchange for a draft pick, as they have with, for example, Sammie Coates, Brad Wing, Ross Cockrell, and Jerald Hawkins. All of them were moved at the end of the preseason process when it was clear that they weren’t going to make the roster, or at least that the competition was close enough that a trade offer was the tie breaker.

Leal is a rookie third-round pick, so it’s extremely unlikely he doesn’t at least make the team. Nearly as unlikely is the Steelers actually carrying seven defensive linemen. With Ogunjobi nose tackle-capable and the limited amount they actually spend in base, it’s conceivable that Leal dresses as a swing end/tackle option, with Adams not making the team, and with either Wormley or Loudermilk serving as the number three end. He’s had no problem putting on weight this offseason, apparently.