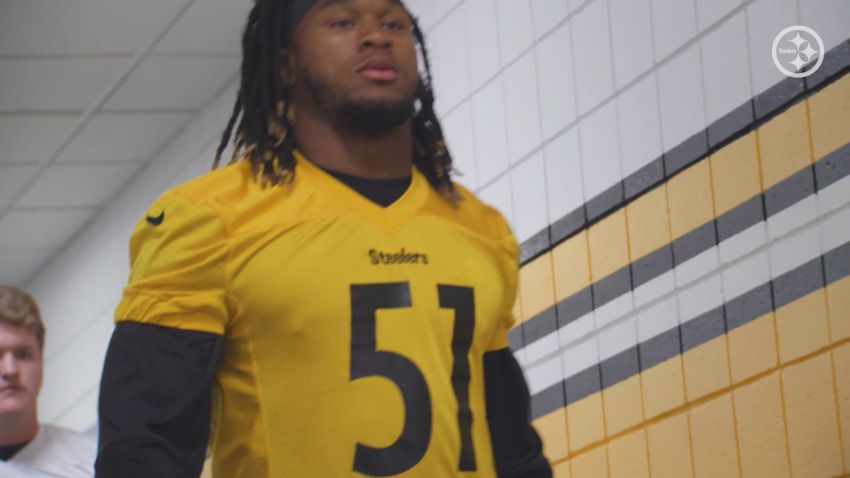 The Pittsburgh Steelers spent a lot of resources via free agency and the draft seeking answers, but there are still some questions that remain outstanding about their 2022 roster and how well it will function when it comes time to snap the ball and actually a game on grass rather than on paper.

For me, the biggest question outside of quarterback is the inside linebacker position and what it will look like. I had more problems with this area of the defense last year than I did the defensive line, and believe the play of Joe Schobert, Devin Bush, and Robert Spillane was as much to blame for the poor run defense.

Will a healthier Bush and the acquisition of Myles Jack solve all the problems in the middle of the defense? I’m sure it can take it to a more palatable state. But if not, perhaps there are some internal alternatives, such as second-year linebacker Buddy Johnson—Adam Rank’s choice for Pittsburgh’s breakout player of the year, although not a very strong one. He writes:

The 2021 fourth-round pick is currently buried on the depth chart behind the newly signed Myles Jack and Devin Bush. But Bush, whose defensive grade from Pro Football Focus ranked 58th among linebackers who played at least 50 percent of defensive snaps last season, has never quite lived up to the expectations set when Pittsburgh drafted him 10th overall in 2019. With Flores on this staff, I’m looking for the 23-year-old Johnson to flash, or at least get regular defensive snaps. I’d also like to shout out Alex Highsmith here, so I can point back to this next season when he finishes with 10 sacks.

The bet-hedging at the end with Alex Highsmith isn’t a bad idea, as he should certainly be in the conversation as taking another big step forward this season, especially assuming that he can actually start the year healthy this time around.

But the Johnson conversation, and whether or not he will get playing time, is an interesting one. For a thumper like himself, he’s not really going to start making a push until we get the pads on in Latrobe, and it might be the preseason games where he opens eyes.

Recall that Johnson actually did start to get some playing time late last season, albeit at a time when the inside linebacker position was in a bit of upheaval due to performance and injury. Then he was injured himself right at the cusp of receiving the opportunity to actually contribute.

The Steelers and head coach Mike Tomlin, however, still remain bullish on his future, and if he is the sort of player that they believed he was coming out of Texas A&M, then it is conceivable that they could find a role for him in this defense, perhaps not dissimilar to the one worn by Vince Williams in his final season in 2020.