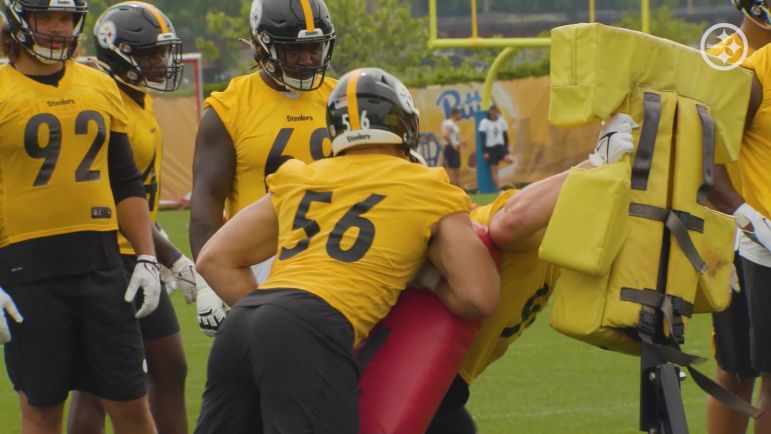 The Pittsburgh Steelers boasted a pair of edge rushers posting double-digit sacks as recently as 2019, when both T.J. Watt and Bud Dupree combined for the feat. They likely would have repeated the effort the following year, had Dupree, who finished the year with eight sacks, not torn his ACL with over a month left to play in the season.

Last year, Alex Highsmith stepped into the starting lineup, and finished his first season as a full-time contributor with six sacks. He had three during his final three games—or four in his final four, if you include the playoffs. Many, including former Steelers linebacker Arthur Moats, believe he has the talent and ability to be the Steelers’ next double-digit sack guy.

“Alex Highsmith is chomping at the bit. I’ve had a chance to talk to him. He’s ready to go”, he recently said on The PM Team program on 93.7 The Fan with Andrew Filliponi and Chris Mueller. “This dude, when I watched him through the OTA, minicamp process, physically looks great. I think he’s a way more mature rusher, a way more confident player, just because he has multiple seasons under his belt”.

A third-round draft pick in 2020 out of Charlotte, Highsmith didn’t need a big learning curve even though his offensive was stunted due to the COVID-19 pandemic, playing double-digit snaps in almost every game—and finishing the year starting after Dupree went down.

He followed up his rookie year with an excellent offseason that seemed to have him primed for a breakout year, only to suffer a groin injury in the weeks leading up to the start of the regular season, which no doubt was at least a partial factor. But he also believes that he left a lot of plays on the field, plays that he intends to complete in 2022.

“For Alex Highsmith, I think nothing less than double-digit sacks and being one of those prominent run defenders”, Moats said, should be the goal. “He should be a double-digit sack guy. That, to me, has to be his mindset. And from talking with him, that is his mindset. He feels like he’s capable of that, and I really don’t see why he shouldn’t”.

While perhaps lacking some of the most elite, freakish athletic traits of Dupree, his predecessor, Highsmith is far from lacking in athletic prowess, and he also came into the NFL as a student of the game and a willing pupil for anyone who had anything to teach him about his craft.

I believe that he has already established himself as a starter, and I believe there’s still a lot more meat on the bone in terms of his full potential. He has already improved his get-off, and his pass-rush repertoire has proven to be an ongoing and evolving venture. The Wilmington native has, in my opinion, proven to be easy to root for, but there are high expectations for him to live up to—both externally and internally.