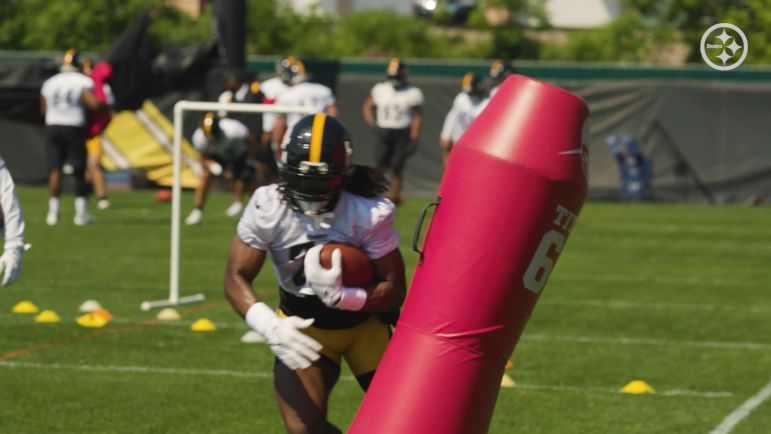 The Pittsburgh Steelers are more than secure with their starting running back in Najee Harris, who reached the Pro Bowl during his rookie season a year ago. They also continue to strike a confident note whenever a coach speaks about fourth-year running back Benny Snell, who had a bit of a reduced role in 2021 playing behind a starter who actually stayed healthy.

But they are still looking to fill out their depth chart, and figure out who is going to step up and take on that number three back. They had four running backs on the roster last season, but did not re-sign Kalen Ballage. Returning is third-year Anthony McFarland, who hardly contributed at all last season—or in his rookie season in 2020.

It wasn’t surprising for him to not contribute much as a rookie in 2020, during the outset of the pandemic which eliminated the vast majority of the offseason program, not to mention the fact that he was also an underclassman with about a year and a half of playing experience.

It was nothing short of a disappointment, however, that he played just 19 snaps on offense last year, recording 14 yards of offense on four touches, 11 of which came on one reception, meaning that he totaled three rushing yards on three carries.

It didn’t help that he started the regular season on the Reserve/Injured List, but even when he got back to the 53-man roster, he was almost always a healthy scratch. He had fallen too far behind and couldn’t climb aboard the moving train. He expects this year to be different.

“I feel ready”, he told reporters during the spring, via Andrew Limberg of 93.7 The Fan. “I say I feel ready because I got a chance to learn. Not just on the field, but off the field and what it takes to be a professional. The things you do during the week to prepare for Sundays, during practice it pays off. It’s something that is starting to click for me in year three”.

There were questions about McFarland’s maturity coming out of college—indeed, the fact that he declared for the draft despite having two years of eligibility remaining was partly attributed to issues with him actually returning to school.

That’s not meant to be some sharp criticism or indictment, or indeed, an attack on his character, but rather to highlight that, perhaps, his mental and emotional maturity may be just as important to his ability to contribute on the field as is his physical maturity.

He will have an opportunity in training camp and the preseason to show how far he’s come, and he’s also hoping to make an impact on special teams as a returner. Right now, he doesn’t have steep competition, paired against only two rookie college free agents, but the front office will be looking for veteran assistance, whether through free agency or trade, throughout the remainder of the offseason.