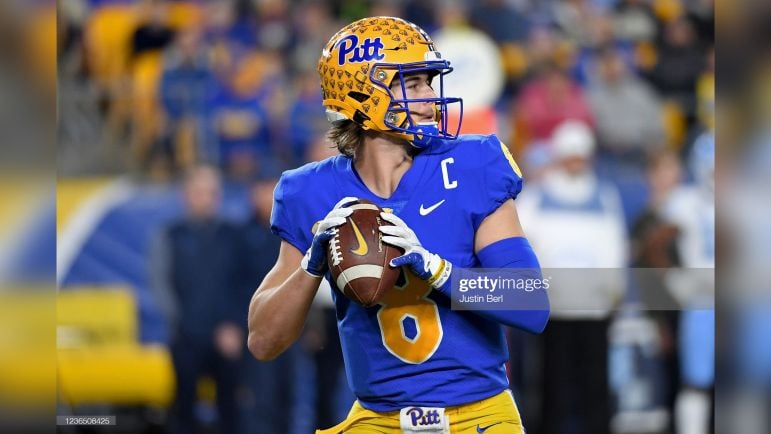 This Monday as the Pittsburgh Steelers finish up their final week of OTAs, first-round rookie QB Kenny Pickett turns 24 years old. Pickett spent five seasons in college, famously coming back for a fifth year in 2021 after having the opportunity to declare for the 2021 NFL Draft, but being advised to come back to improve his draft stock. The decision was the best one Pickett could have made as he went on finish third in the Heisman voting last season while breaking Dan Marino’s all-time passing mark at Pitt, enjoying a breakout campaign to the tune of 4,319 yards, 42 touchdowns to only seven INTs with another five rushing scores, and a 165.3 QB rating, while completing 67.2% of his passes.

Still, Pickett was heavily scrutinized during the pre-draft process for his reported hand size and the fact that he would be a 24-year-old rookie. While many teams prefer to have younger rookie QBs that have room to develop and reach a higher ceiling, GM Kevin Colbert and HC Mike Tomlin had no issue with Pickett’s age as addressed in the post-pick press conference, calling it a good decision to go back for another season to develop into what many “draft experts” called the most pro-ready QB in the draft class.

Hand Size, Age Not Factors For Steelers In Pickett Decision: ‘Never Even Paid Attention To It’

So, does the fact that Pickett will be 24 for his entire rookie season put a cap on his potential success in the league moving forward? The obvious answer is no or that it is too early to tell, but for the sake of argument, let’s look at several other recent first-round rookie QBs that were drafted at 23 years old or older and where they currently stand.

Baker Mayfield was age 23 when he got drafted by the Cleveland Browns at #1 overall in the 2018 NFL Draft after transferring from Texas Tech to Oklahoma where he got his chance to shine in the college spotlight. Andrew Luck turned 23 right as his rookie season got underway in 2012, also being the #1 overall pick by the Colts at the time and saw immediate success on the field. Ryan Tannehill, who was drafted the same year at #8 overall, turned 24 right before his rookie season started and started all 16 games, beating out Matt Moore for the QB1 spot.

Imagine a world where the #Chiefs are on the NFC East. pic.twitter.com/LWbgNw9PEH

Starting a rookie season as a 24-year-old isn’t something that is out of the ordinary for the quarterback position. Carson Wentz turned 24 during his rookie season back in 2016 after being the #2 overall pick by the Philadelphia Eagles that season out of North Dakota State, taking his time to develop at the FCS level before jumping to the NFL.

Now, while that is an example of a QB that had some notable success for being an older rookie QB, at least at some point, there definitely seems to be a “too old” mark for a rookie QB. Brandon Weeden was famously drafted at 28-years-old by the Cleveland Browns in the first round of the 2012 NFL Draft, turning 29 during his rookie season on October 14. Needless to say, Weeden ended up being the biggest bust of this entire group, starting only 25-of-35 games played in the NFL and posting a horrendous 6-19 record as a starter.

Here is Jon Gruden's reaction to the Brandon Weeden selection in the 2012 NFL Draft: pic.twitter.com/GkRGnSa0x2

Still, while Luck’s career ended prematurely due to an early retirement and Mayfield is now on the trade block, all the other names mentioned in this study all enjoyed some semblance of success despite being on the older side of things coming out of college. Mayfield broke the rookie single season passing TD record as a rookie and led the Browns to the playoffs in his third season. Luck took the NFL by storm as a rookie, posting three-straight 11-5 seasons and three Pro Bowl appearances, becoming the next NFL franchise QB.

Tannehill took a little more time, but still posted multiple 4,000-yard passing seasons in Miami before getting a revival in Tennessee, leading the Titans to back-to-back playoff berths the last two seasons. While Wentz has since struggled in recent seasons, he looked like the next great franchise QB in Philadelphia early on in his career, playing at an MVP-caliber in his second season before suffering and ACL tear prior to the team wining the Super Bowl with Nick Foles.

Film Room – Do The Burrow/Pickett Comparisons Have Any Merit?

Do these examples mean that Pickett is destined to be next in-line as a more “experienced, pro-ready” QB that will have some sort of immediate success at the NFL level? No, but the topic of age being the nail in the coffin for success at the professional level shouldn’t be a death sentence earlier. I was in that camp during the pre-draft process, thinking that an older QB would mean a shorter NFL career or a limited ceiling. Still, when looking back at the number of young QBs that have also flamed out and have failed to develop, maybe age can come before beauty when it comes to the QB position. Only time will tell, but for now, go wish Mr. Pickett a happy birthday!

What’s been your favorite moment from the Pitt great and new @Steelers QB?#H2P 🎂 @KennyPickett10 pic.twitter.com/rga5LZSTJB

What are your thoughts on Kenny Pickett and his age? Does it bother you that he is an “older” NFL rookie QB? Do you think there is a correlation between QB age and career success or longevity? Please leave your thoughts in the comments section below and thanks again for reading!