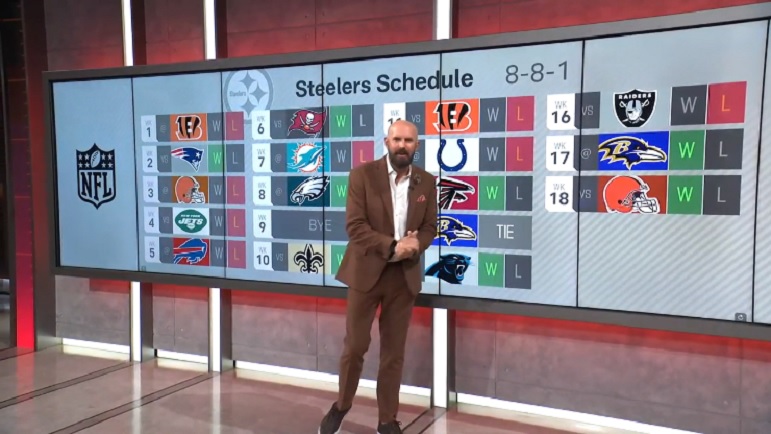 When mentioning the upcoming season for the Pittsburgh Steelers, the word most often thrown around is change. It truly is the end of an era for the team after multi-time Super Bowl champion and future Hall Of Fame quarterback Ben Roethlisberger hung up the cleats ad walked off into retirement after spending his entire 18-year career donning the black and gold. Many question marks now surround the team, the biggest of which is who will fill the massive shadow under center left by #7? Will it be free-agent signee Mitch Trubisky, the former #2 overall pick in the 2017 draft of the Bears who sports a 29-21 career record as a starter, including a 2018 Pro Bowl year? Or will it be first-round draft pick Kenny Pickett, the native son and Heisman finalist hailed as the draft’s most pro-ready QB?

What about the offensive line? Will the free-agent pieces added come together and gel efficiently, allowing the team to rely on it’s ground game and defense to win games? And what about the defense, whose rankings against the run were dead last in 2021? The retirement of Stephon Tuitt looms large, as well as the question mark that is inside linebacker Devin Bush. Will he regain the explosive form he showed in his rookie season before tearing an ACL in his sophomore season, which resulted in timid play last season? Those and many other question marks surround the team, perhaps why many naysayers aren’t giving them their due in regards to the upcoming season, in which their schedule is tied for the 12th toughest at .512.

Count Adam Rank of NFL.com among them, as he recently broke down each team’s schedules for 2022 on a game-by-game basis and gave the Steelers an 8-8-1 record. He even has the team getting underway to an inauspicious start, which will definitely raise some eyebrows.

He opens up with a very tough game for the team, having to go on the road to face Joe Burrow and the defending AFC Champion Bengals, which naturally a lot of people assume the team will lose. He does have the team bouncing back in Week 2 to defeat the Patriots. However, after that, he has the team taking a three-game slide, losing to the Browns, the Jets and the Bills. The Jets were a draft darling of many analysts, garnering glowing grades. However, losing to a team that went 4-13 last season, especially at Heinz Field, seems a bit of a stretch. Rank does have an interesting take however, seeming to attribute the team’s awful start to the play of Trubisky.

“Starting off 1-4, if Mitch Trubisky is the starting quarterback, he wouldn’t be after a 1-4 start,” Rank said on NFL.com.

Just to show off what a roller coaster ride Rank’s predictions are, naturally he has the team heading back home to defeat Tom Brady and the Buccaneers, an NFC powerhouse, before losing to the Dolphins and then defeating in-state rival Philly, a team many are predicting big things from next year. After their bye week in Week 9, some of Rank’s highlighted items are getting swept by the Bengals on the season, and finishing their Week 14 battle versus hated rival Baltimore in a tie, which would mean the team would have consecutive seasons with a tie after last year’s tie with Detroit.

“The best case scenario, the Steelers, who made the playoffs last year with Big Ben, playing with a new quarterback, actually play a little bit better. Worst case is that the bottom falls out, this team is not reminiscent of Mike Tomlin at all, but I don’t see that as the case. I have them right there, at .500.”

It’s worth noting that the team does have six of their final seven games against non-playoff qualifiers from last season. However, those include the Ravens, who should be much improved after an injury-marred 2021 campaign, and the Browns, who are a total wild-card at the moment as more news regarding their new QB Deshaun Watson unfolds. Mike Tomlin has never finished below .500 but will this be the year? Let me know your thoughts on Rank’s assessment in the comments below.