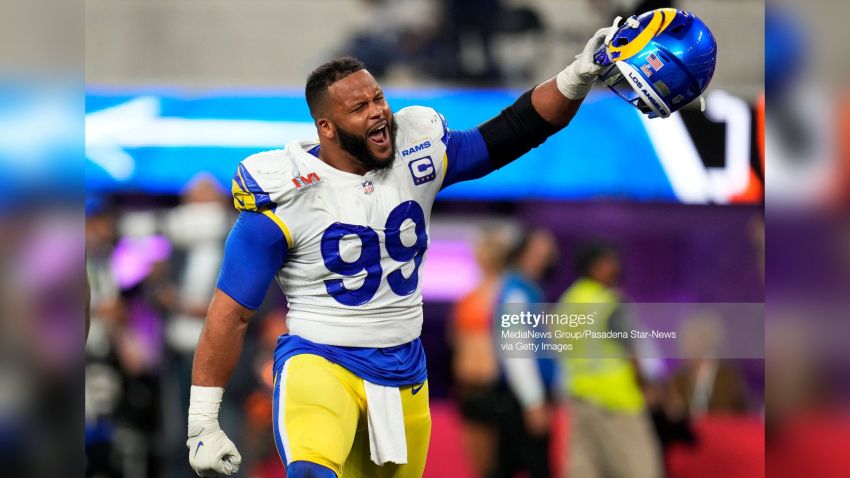 How’s this for a juicy little nugget this morning to get us all excited for no reason? As you’ve surely heard, Pittsburgh native Aaron Donald just because the highest-paid non-quarterback in NFL history at the age of 31—but not before giving very serious consideration toward walking away from the game.

Donald had three years left on his contract at $55 million in total. The Los Angeles Rams upped that to $95 million, giving him a $40 million pay raise without adding any new years, paying him $65 million through two and guaranteeing all of that.

2024, however, is not guaranteed at all, so it’s effectively a two-year deal. That surely means that he will be playing for the Pittsburgh Steelers by then, right? Well, that’s the far-fetched case made by Mike Florio in a late-night posting—though not wholly without logic.

Florio writes that the driving force behind Donald’s serious contemplation of retirement this offseason was his desire to get back to the east coast and be around Pittsburgh. There’s no easier way to get back to Pittsburgh as a professional football player than to play for the Pittsburgh Steelers.

So he suggests that, after 2023, Donald could retire and just walk away from the game and head back east. Or, he could retire, and then attempt to unretire with a team closer to home, or a generally more desirable-to-him destination. Kind of like Rob Gronkowski did a couple years ago, and a number of other players—and coaches—over the years.

“It could be Pittsburgh. It could be Cleveland. It could be Cincinnati. It could be Baltimore. Really, any of the AFC North teams would put him far closer to home, if he decides to keep playing after 2023”, Florio writes. “The Rams would have to decide whether to take what they can get for the final year of Donald’s deal and let him finish his career elsewhere, or the Rams can watch him retire without ever playing for another team. And get nothing in return”.

I will say this—at least it’s not implausible. If Donald really considered retirement because he wanted to be closer to home, at the age of 31, then he can certainly consider retirement while still in Los Angeles heading into the 2024 season at the age of 33.

And if he really wants to be closer to home then, but would also still like to play, then the retire-unretire procedure, whether it is done intentionally or unintentionally, is one option. As said, the Rams could refuse to trade him and just let him retire and get nothing for it, or they could trade him, as the Green Bay Packers did, under different circumstances, with Brett Favre.

Now, is Aaron Donald ever going to play for the Pittsburgh Steelers? I’m going to go out on a limb and just say, no, he’s not. Just like J.J. Watt. But it’s interesting to think about the scenario that it would take to make it happen, anyway.