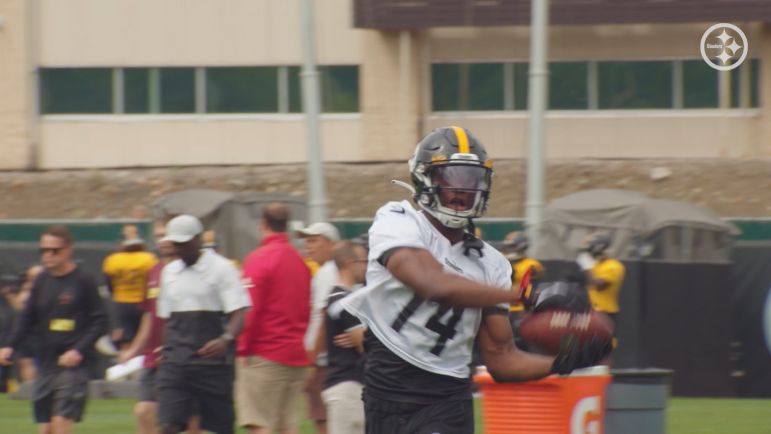 Reasoning: While OTAs and minicamp might not be a lot to go on, rookie second-round wide receiver is said to have looked the part thus far, making his share of impressive catches and showing off some nice moves in general, even if exhibiting some of the ‘raw’ qualities that his head coach has acknowledged.

If the Steelers are to expect George Pickens to play a big role in their offense this year, then it probably is not a bad thing if he already shows signs of looking the part. As a second-round pick at a position that is becoming increasingly plug-and-play, however, that he did look good during OTAs should come as no surprise.

But he did, at least based on the reviews of the beat writers (some of them quite glowing, in fact), and that’s all we have to go off of for now. In fact, I personally haven’t come across anybody of substance actually having anything meaningfully negative to say about his performance on the field over the past month.

Pickens has exhibited his ability not only to maximize his physical tools, making the most of his height, but also to play ‘smaller’ as well. That’s what we already saw in him on his college tape, anyway, but a big man playing little-man football, at least in this sense, is never a bad thing to see.

Now, has he thrown Justin Layne or James Pierre to the ground at all during practice sessions? Who knows? But the physical part of the position is obviously something that we would expect to see more in training camp. I would imagine that he is looking forward to getting the pads on as well, another step toward ‘real’ football.

There is an opening for Pickens to play a lot this year, given the fact that they lost three wide receivers in free agency, but it won’t be handed to him. The Steelers have some veterans on the roster whom they could employ as a third receiver behind Diontae Johnson and Chase Claypool if they feel that the rookie has not earned it. Or Calvin Austin III could sneak underneath him. So he ought to focus on looking even better in August than he did in May and June.