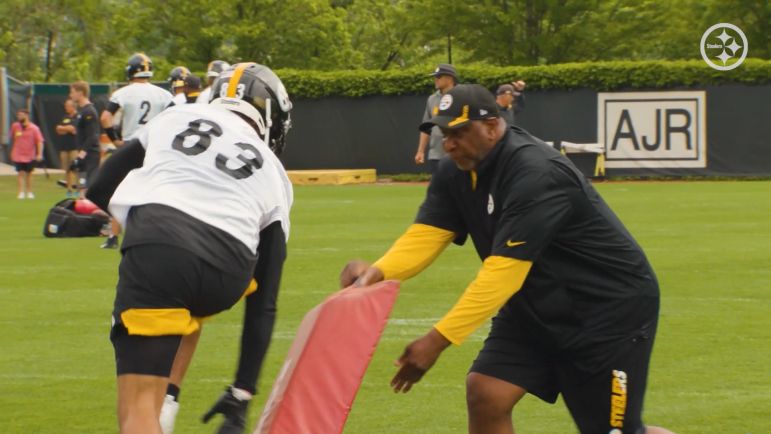 Reasoning: Drafted in part, though not primarily, because of his ability to catch the football, the rookie Heyward has reportedly shown the ability to make plays with his hands over the course of the team’s spring drills.

Let’s start at the beginning: assuming that Connor Heyward makes the 53-man roster, and dresses on Sundays, it’s overwhelmingly likely that his duties will be reserved almost exclusively for play on special teams. But he could be an exciting player to watch during the preseason.

Because apparently, the guy can catch the football, and the Steelers do throw to their fourth and fifth options during the preseason. And Connor Heyward, when he’s on the field, is going to be a guy who, faced with favorable matchups, is going to get open, and is going to make some nice catches.

The youngest of the Heyward siblings, Connor was drafted in the sixth round out of Michigan State in April, after converting to a hybrid tight end or H-back role during his senior season. He is potentially ticketed to fill in the ‘TE3’ spot on the 53-man roster, even if, assuming he ever got on offense, he would likely not be asked to perform a lot of traditional tight end assignments.

This is a pretty simple stock watch today. Heyward’s scouting report said he could do a bit of catching. What he did on the field over the past few weeks seemed to verify that. He in particular had a bit of a connection going with fellow rookie quarterback Kenny Pickett, based on the accounts of the beat writers—with Heyward even having to deny when one reporter asked him if he’d become Picket’s go-to target.

Of course, he apparently had that boneheaded moment during a two-minute drill in which he failed to quickly bring the ball back to be put in play, but that’s an easy enough mistake to learn from in June. Now, when if ever are we going to actually see him contributing offensively? With Pat Freiermuth and Zach Gentry ahead of him and a pass-catching running back in Najee Harris, it’s hard to imagine him seeing too many targets come his way.

But Danny Smith will have a job for him.