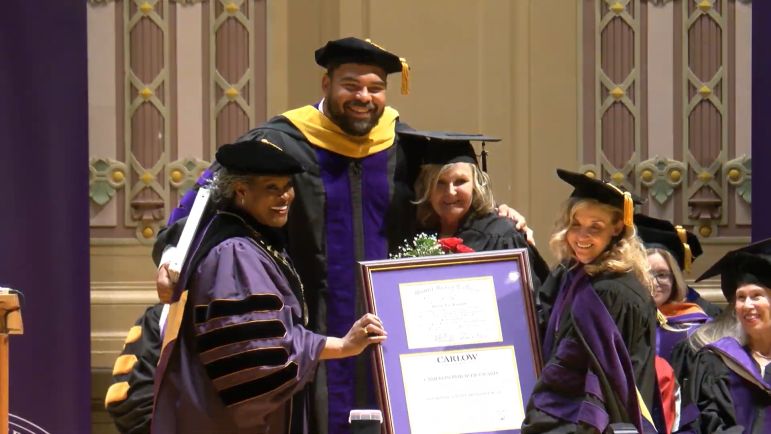 It’s graduation season, the time of year where hundreds of thousands of students around the country are completing their college degrees, and participating in that all-too-satisfying graduation ceremony, a celebration of the culmination of a long period of dedicated work.

Sometimes you earn through deed, rather than study, however. Schools from time to time will dispense an honorary degree, acknowledging the great accomplishments of an individual in a particular field. Pittsburgh Steelers defensive lineman Cameron Heyward yesterday received an honorary doctorate degree of his own yesterday through Carlow University, after delivering the commencement address for his extensive charitable work to which he has been committed during his playing career (you can watch the commencement address at the end of the article).

That’s not an arbitrary honor. Heyward’s grandmother graduated from Carlow in 1965—she was with him on stage today, as Teresa Varley notes for the Steelers’ website. His mother, Charlotte, also in attendance, received a full academic scholarship through Carlow. Heyward’s father, of course, went to Pitt, as you may know.

“I am very humbled”, Heyward told Varley. “My grandmother was ecstatic for me to be speaking at her alma mater. She had to work while she was at school. That was the only way she was able to graduate. They were able to give her a scholarship while she was teaching at the same time. We have been very fortunate that Carlow helped pave the way for my family”.

Of course, the family’s fortunes changed over time, and now Charlotte has two sons drafted into the NFL—specifically, both by the Steelers. Pittsburgh drafted Cameron, son of Panthers standout Craig ‘Ironhead’, in the first round in 2011 out of Ohio State. They just drafted his younger brother, Connor, in the sixth round out of Michigan State last week.

It might be good publicity for Carlow, but it’s also a deserving accolade for Cameron, who has dedicated so much of himself, and of his own resources, toward giving back to the community since he has gotten into the league—and he has already vowed to teach his brother to be the same way, in the memory of their father, another beloved community figure.

“When I got drafted here, I made a pledge to myself that I wasn’t going to just be a part of a team, I was going to be a part of the community”, he told Varley. “I have tried to live that way and with that I am trying to create a legacy for me and my family”.

It’s why he has been a nominee for the Walter Payton Man of the Year Award four times, although he has not yet actually won the award. His work through The Heyward House is as much a part of his legacy and that of his family as his playing career has been, and will hopefully have an even longer reach, through generations.

Heyward also talked about wanting to set that example. “I want my son to understand what it means to be a part of the community”, he said, “what it means to give back and the blessings we have accumulated over the years”. I don’t think he’ll have to worry about that, through his own example.