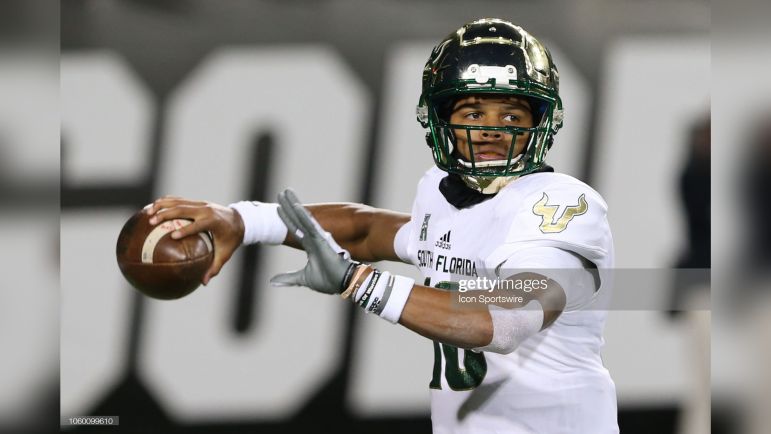 Chris Oladokun might have been this draft’s most well-traveled player. Born in Tampa, he attended two high schools before committing locally at South Florida. His time there was short and he transferred to Samford before making a move up north last season with South Dakota State, starting for the Jackrabbits and leading them to a deep playoff run.

It was a turbulent college career that didn’t offer much stability. But that experience is paying off in the NFL, allowing him to pick up the Steelers’ playbook that much quicker. New terminology, verbiage, and scheme isn’t new to him. It’s all he’s known.

Talking with Pittsburgh’s 93.7 The Fan Monday, Oladokun spoke to his past travels benefitting him in the present.

“A hundred percent,” he said when asked if the different systems help him now. “I went from USF, which was sort of like a read option offense, and then go to Sanford, which was Air Raid. So those were two completely different. Then I went to South Dakota state and that’s more of a pro offense with huddling like we do and longer verbiage. So that definitely got me prepared for this opportunity.”

What he learned at South Dakota State might be the most valuable, the closest to a NFL system. A “pro-style” offense isn’t just about getting work under center, most NFL teams are primarily shotgun-based, including the Steelers’, but it’s the overall way in which they work. There’s more to the progression and concept than a quick box count or reading just one linebacker, like you might on a RPO. As Oladokun notes, there’s a huddle where most spread and tempo systems rely on sideline signs and one or two word calls to get the play in. The overall command and feel and style is different and is probably already paying off for Oladokun.

But the fact he has experience in different systems has wired his brain the right way. When he came to a school, there was no sit-and-learn. No redshirt year to hang back, master the offense. Almost every year he was with a new school, new coaching staff, and new system. Arriving in Pittsburgh, even with its likely bigger and more complicated playbook, is just old hat. And that will serve Oladokun well. It’s certainly a contrast to Kenny Pickett, who offers plenty of experience, but remained at Pitt his entire career.

As the team’s #4 quarterback this summer, he’ll have to maximize the chances he gets. That’s not a spot that generally offers many reps. Josh Dobbs found that out last year, barely seeing the field in practice and on days where Ben Roethlisberger worked in full, Dobbs would go the day without a single team rep. Oladokun could be in a similar tight spot this year with the team needing to give Mitch Trubisky and Kenny Pickett as many reps as possible.

For Oladokun, picking up the playbook early and showing an advanced understanding of it is his best path to seeing reps and more importantly, performing well when given those reps. It’s a similar arc to the man he replaced at Samford, Duck Hodges, who quickly impressed with the team and got more chances because of it, though it was Roethlisberger’s injury that really opened the door for him to play.