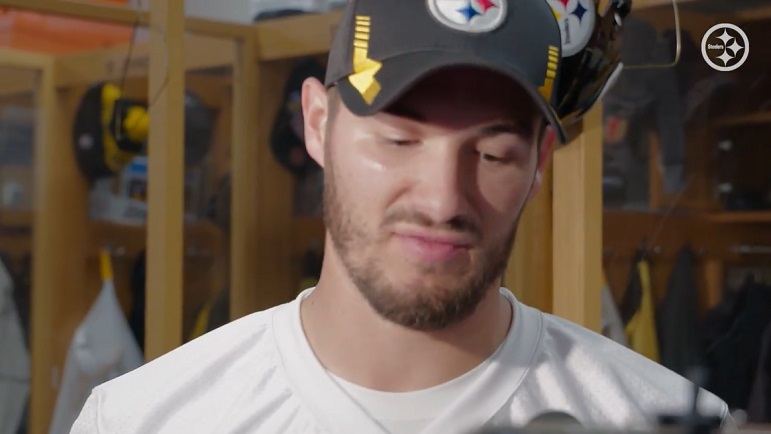 The Pittsburgh Steelers 2022 OTA practices got underway on Tuesday and according to pictures and videos posted online, Mitch Trubisky was the top quarterback as far as order or reps go. As you can imagine, Trubisky has a lot of weight on his shoulders this offseason as not only is he expected to be the initial successor of Ben Roethlisberger, but also a mentor of sorts. to the team’s top draft pick this year, quarterback Kenny Pickett. After Tuesday’s practice, Trubisky talked a little about his Pittsburgh predecessor and how he’s done his part to welcome him to the franchise.

According to Trubisky, who signed a two-year free agent contract with the Steelers back in March, Roethlisberger invited him and his wife over for dinner a couple weeks ago.

“It was so nice of him to open his house and have dinner with him and just have those conversations and get to know him,” Trubisky said on Tuesday, according to Gerry Dulac of the Pittsburgh Post-Gazette. “For him to allow me to get to know him and pick his brain and talk about what it means to be the quarterback of the Pittsburgh Steelers, it really meant a lot to me.”

That certainly was a great gesture on the part of Roethlisberger and one that probably helped ease the mind of Trubisky some. Let’s face it, Trubisky isn’t in enviable position right now. He is currently known as the next quarterback to come after Roethlisberger and as the quarterback who is keeping the starters seat warm until Pickett is ready to sit in it.

For now, however, it seems as though it is Trubisky’s job to lose in Pittsburgh and that’s all that matters. On Tuesday, he seemed to say all the right things during his post OTA practice press conference and that includes the answer he gave when asked if he was surprised that the team drafted Pickett in the first round.

“No, I really wasn’t surprised,” Trubisky said. “We needed to add to the quarterback room and that’s what we did. So, we’re happy to have him and I’m looking forward to working with him.”

Trubisky also gave the right answer when asked if the Steelers indicated to him when they signed if they might ultimately draft another quarterback early.

“They didn’t,” Trubisky said. “I knew coming into the situation, just even coming from here from last year, wherever I was going to go, I was going to have to come in compete, earn the trust of my teammates and get back onto the field with hard work and my talent and just being a leader on this team. So, we didn’t have those conversations, but I knew it was a possibility, wherever I would go next.

Trubisky was asked on Tuesday what he does do to kind avoid being overwhelmed by the task of trying to replace a guy in Roethlisberger who’s been face of the steelers franchise for such a long time.

“I think, well, one, you’re not going to replace a Hall of Famer,” Trubisky said. “You got to come in and be yourself and take it one day at a time. I’m just trying to be me, but you also have that huge respect for the people that came before you and I have the ultimate respect for Ben and what he’s done here. Obviously, Hall of Famer, two Super Bowls. And that’s what we’re trying to do, we’re trying to continue the legacy, win another Super Bowl and just continue to get better and build every day.

As far as Trubisky and the contact he expects to have with Roethlisberger moving forward?

“I’ll just have a continuing ongoing relationship with him, but it was cool,” Trubisky added.