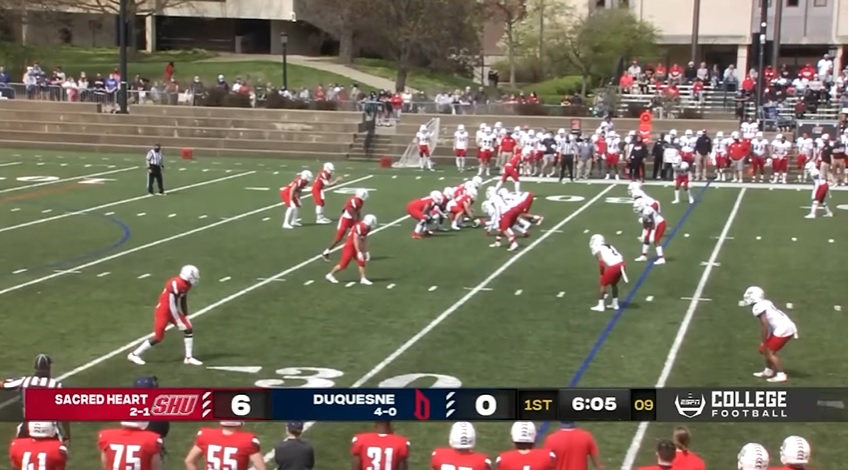 Following the conclusion of the NFL Draft on Saturday, the Pittsburgh Steelers inked 10 undrafted free agents to contracts. One of them was Jake Dixon, an offensive tackle from Duquesne, just two miles away from Heinz Field. Dixon’s journey to the NFL was not a straight line however, as the Bethel Park, Pa. native originally committed to play volleyball as a senior in high school. As Aidan Joly profiled in the Pittsburgh-Post Gazette last July, Dixon struggled with injuries during his high school football career, which left him with a limited amount of tape to show to potential schools.

Lewis was recruited by multiple national powerhouses to play volleyball, and ended up at Lewis University in Chicago. While at Lewis, Dixon realized how much he missed playing football and ended up transferring to Duquesne, where he began his career as a tight end. A shoulder injury after the 2019 season brought with it a position switch to offensive tackle, which Dixon had to add weight for. He’s now listed at 6’5″ and 290 lbs.

“He’s a great leader of our football team,” Doria said. “He’s obviously a team-first guy, an unselfish guy that switched positions for us and was willing to do whatever was best for the team. It’s just a testament to him and the kind of kid he is.”

The switch to offensive line proved fruitful to Dixon. Along with being able to play every snap, he became a star for the Dukes. He was named to the 2020-2021 and 2021 All-NEC first team. Off the field, Dixon was no slouch either, as he was a semi-finalist for the 2021 William V. Campbell Trophy, which is considered the academic Heisman and is awarded to the player with the best combination of academics, community service, and on-field performance. Dixon finished his career at Duquesne by appearing in a school-record 50 games, and was the leader on an offensive line that allowed just 1.2 sacks per game, 17th-best in the FCS.

Dixon will join a Steelers offensive line room that includes newcomers James Daniels and Mason Cole, as well as fellow undrafted free agents in North Carolina offensive tackle Jordan Tucker and Alabama guard Chris Owens. He’ll likely be competing with Tucker and the likes of Chaz Green, John Leglue, and Joe Haeg for a spot on the roster as a backup tackle. Chukwuma Okorafor and Dan Moore Jr. are expected to be the teams’ two starting tackles.