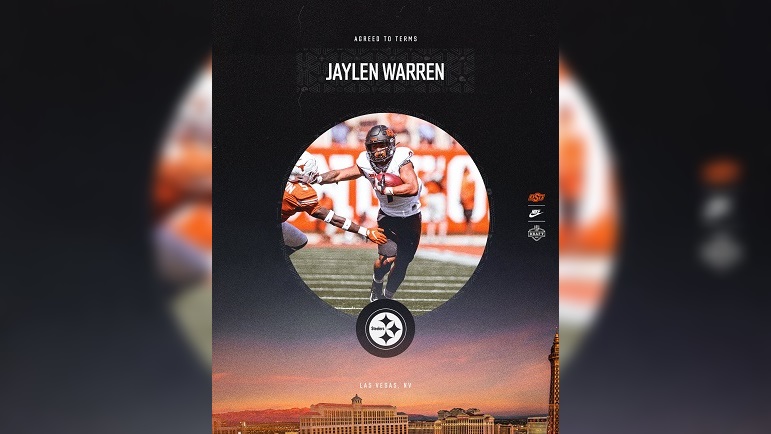 When the Pittsburgh Steelers signed RB Jaylen Warren as an undrafted free agent, they knew they were getting a well-traveled player who made stops at three different schools during his college career. Warren told Scott Wright of the Oklahoman how appreciative he is of the journey that led him to a possible NFL career.

“I did not expect the season I had. It 100% was worth it. I’m glad I made the move. I don’t regret anything in the journey that led me up to here, so I’m grateful for all of it,” Warren said.

Warren opened the season as the third-string running back, but a 218-yard performance early in the season against Boise State led to Warren winning the starting job and compiling 1,216 rushing yards, 225 receiving yards and 11 rushing touchdowns on the season. He was an All-Big 12 selection and was also a team captain. Warren joins UDFA Mataeo Durant in the running back room, along with Najee Harris, Benny Snell Jr., and Anthony McFarland Jr.

Warren began his career at Snow College, a Junior College located in Ephrain, Utah near Warren’s home of Salt Lake City. Warren wasn’t heavily recruited out of high school, according to his high school football coach Brandon Matich. Matich told the Oklahoman “I couldn’t get guys to bite on him. They didn’t think he was fast enough. They didn’t think he had finishing speed.”

Although Warren ran for 3,099 yards his senior of high school, he ended up at Snow, where he ran for 1,435 yards his sophomore year before transferring to Utah State. He had success his first year, running for 569 yards and five touchdowns, but he opted out after three games during the 2020 season and transferred to Oklahoma State.

Warren’s former coaches have praised his toughness and work ethic. “He never, ever shied away from the work,” Paul Peterson, Warren’s head coach at Snow College said. “I loved that part about him. Whether it was uncomfortable or whatever, he just kept grinding and kept getting better and better.” Oklahoma State Head Coach Mike Gundy said that Warren was “unselfish and he was tough,” while also praising his blocking.

“You ask him to block on certain plays, he blocks. He blocks like a tight end,” Gundy said. “When he runs, he runs hard. He’s unselfish. So, he’s very valuable”

Given the lack of quality running back depth the Steelers currently have, Warren definitely will have a chance to stick on the roster or practice squad. Comparing him to Durant, his fellow UDFA, Durant has more burst and speed than Warren, while Warren runs hard and is able to shake off contact and run through defenders much better than Durant. Warren’s willingness to block and ability to hit lanes hard and run through contact makes him seem like an attractive fit in Pittsburgh. Once minicamps open, it will be interesting to see how Warren performs and if he is able to stick on the roster.

For more on Warren, check out Daniel Kitchen’s profile on him at the link below.