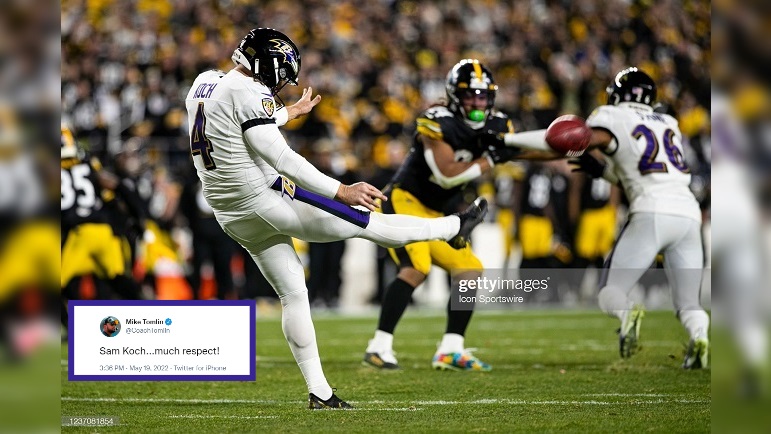 It’s going to be weird not seeing Sam Koch punt for the Baltimore Ravens moving forward, as it seems like he’s been doing that for 20 years or more. On Thursday, Koch, the Ravens’ all-time leader in games played and one of the NFL’s most consistent punters, announced his retirement after 16 seasons. He now plans to join the Ravens’ coaching staff as a special teams consultant.

Steelers head coach Mike Tomlin certainly noticed Koch’s retirement on Thursday, and that is evidenced by him giving a major tip of his cap to the Ravens’ longtime punter on Twitter.

Tomlin tipping his cap to Koch probably isn’t a huge surprise, however. Why? Well, Tomlin has made reference to Koch several times over the years during his early-week press conferences ahead of the Steelers playing the Ravens. Just last season, and before the Steelers played the Ravens for the second of two times, Tomlin made a reference to Koch.

“Their punter’s been doing it at an extremely high level for a long time,” Tomlin said of Koch ahead of the Week 18 game against the Ravens.

A sixth-round pick from Nebraska in 2006, Koch won the Ravens’ starting punting job as a rookie. He wasn’t even one of the punters invited to the NFL Combine that year. Now 39, Koch played in a franchise-record 256 games for the Ravens and was a member of their 2012 Super Bowl-winning team. He played in 239 consecutive games before missing his first game in 2020 when he was placed on the Reserve COVID/19 list. Koch made the Pro Bowl in 2015 and never averaged fewer than 43.0 yards in any season.

The Ravens selected Penn State punter Jordan Stout in the fourth round with the 130th overall pick in the 2022 NFL Draft, and he’ll now likely be the one to succeed Koch. He has some big shoes to fill for sure.

With Koch now retiring, I bet Tomlin can’t wait until he can give a final tip of his cap to Ravens’ kicker Justin Tucker as well. Tucker is just 32 years of age, however, so Tomlin might have a long time to wait before he gets to tip his cap one last time to that longtime Baltimore weapon.