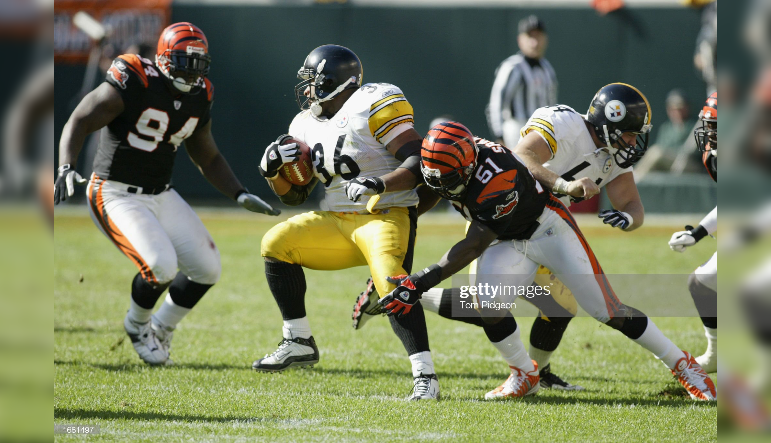 By this point in the Pittsburgh Steelers’ offseason, you all should know by now that the Steelers open up the 2022 regular season on the road against the Cincinnati Bengals in an AFC North battle that has the Steelers being the hunters, rather than the hunted, changing roles with the Bengals entirely.

During the 2021 season, the Bengals had their way with the Steelers in 24-10 and 41-10 wins in the regular season on their way to winning the AFC North and eventually representing the conference in the Super Bowl last season.

Heading into the Week 5 matchup, the Steelers were sitting at 1-3 on the year after a 32-29 loss to the New Orleans Saints the week prior. Hitting the road for a matchup with the Bengals was exactly what the doctor ordered for the Steelers that season as under the guidance of veteran quarterback Tommy Maddox, the Steelers jumped out to a 24-0 lead at the half and never looked back, dominating in all facets of the game.

The Steelers got off to a slow start defensively in the Week 5 matchup as the Bengals drove right down the field on the opening drive, leaning heavily on star running back Corey Dillon on the ground, but a Neil Rackers field goal was no good from 46 yards, giving the Steelers the football for their first possession.

Two plays into the Steelers’ first drive of the game, Maddox found standout wide receiver Plaxico Burress for 36 yards down the left sideline, putting the Steelers into Bengals’ territory.

Is that…is that play-action? What a sight that is. Maddox did a great job selling the fake and then found Burress wide open down the left side of the field for the 36-yard strike. Five plays later, future Hall of Fame running back Jerome Bettis plunged into the end zone from 1-yard out on his fifth straight carry, giving the Steelers a 7-0 lead with 8:10 left in the first quarter.

Pittsburgh’s defense then found its footing, forcing a three-and-out by the Bengals, giving the ball right back to Pittsburgh’s offense. Maddox went right back to Burress again, this time up the seam on the right side of the field between two defenders for the explosive play.

It sure is great to go back and see such a big, physical specimen like Burress getting deep the way that he did. Hopefully that’s what Steelers’ rookie George Pickens can provide.

Following the 32-yard strike to Burress up the seam, the Steelers ran two more plays before Maddox made his first mistake of the game, throwing an interception to Bengals’ safety Kevin Kaesviharn, ending a promising drive.

Following Flowers’ interception, the Steelers marched into Bengals’ territory before the drive stalled, leading to a 34-yard field goal from Todd Peterson to go up 10-0 on the road against the Bengals early in the second quarter.

On the very next offensive possession for the Bengals, Flowers again took the football away, undercutting another poor Kitna throw — this one intended for Peter Warrick — giving the Steelers the ball back near midfield.

Three plays later, Bettis sprinted off left end, made a few defenders miss and found his way to pay dirt, giving the Steelers a 17-0 lead on a vintage Bettis rumble.

Just look at the blocking early on in the play by fullback Dan Kreider, left guard Alan Faneca, left tackle Marvell Smith and Burress, springing Bettis downfield before he gets some help from wide receiver Hines Ward to finish the run off.

What a thing of beauty.

Up 17-0 and smelling blood, the Steelers’ defense turned up the heat as Joey Porter raced through off left tackle on the fifth play of the Bengals’ drive, knocking the ball out of Kitna’s hands for the strip sack. With the ball loose, it found its way right into the gut of standout nose tackle Casey Hampton, who rumbled 36 yards to set the Steelers’ offense up at the Bengals’ 7 yard line.

Three plays later, Maddox found Kreider from 4 yards out for the touchdown, giving the Steelers a 24-0 lead that they’d take into the half after a late missed field goal by Peterson.

Opening up the second half, the Steelers put the final nail in the coffin as standout return man Antwaan Randle El provided some splash on special teams, taking the second-half kickoff 99 yards to the house, going Pittsburgh a 31-0 lead it would never relinquish.

He sure was something to see in the open field with the football in his hands. He had speed for days and was a true game-breaker for the Steelers. That’s a fun clip to watch again all these years later, especially with the fake reverse handoff to Lee Mays. Now there’s a name!

Down the stretch the Steelers allowed a 2-yard touchdown on the ground to Dillon following Maddox’s second interception of the game. Pittsburgh was able to close it out late though with a 30-yard Peterson field goal finishing off a 15-play drive that featured 13 rushing attempts between Bettis, Amos Zereoue and Verron Haynes, bludgeoning the hapless Bengals.

In the win, Bettis finished with 109 yards and two scores on the ground on 21 carries, while Zereoue added 51 yards on 10 carries. Burress finished with eight receptions for 149 yards, while Maddox completed 16-of-25 passes for 216 yards, one touchdown and two interceptions.

The Steelers went on to finish 10-5-1 that season, tying with the Atlanta Falcons at Heinz Field in November. The Steelers then went on to win the Wild Card matchup against the Browns in thrilling fashion, 36-33, before falling to the Tennessee Titans in the divisional round, 34-31.