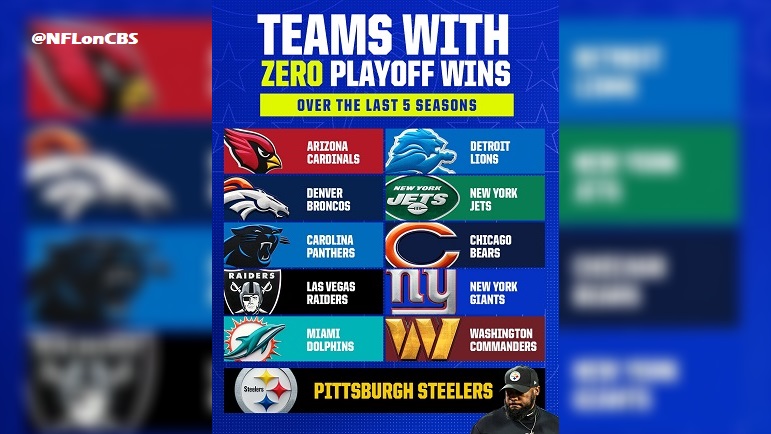 While the Pittsburgh Steelers have a nice distinction of not having had a losing record since 2003, they do currently own another not-so-nice distinction that would be great to see come to an end in 2022, and one that is attached to a string of the last five seasons.

According to a graphic passed along on Monday by CBS Sports, the Steelers are one of just 11 teams that have not won at least one playoff game over the course of the last five seasons. The other ten teams are the Arizona Cardinals, Carolina Panthers, Chicago Bears, Detroit Lions, Denver Broncos, New York Giants, New York Jets, Las Vegas Raiders, Miami Dolphins, and Washington Commanders.

Obviously, that’s not great company for the Steelers to be in as they head into the 2022 season, and with their own AFC North division perhaps being the most balanced that it’s ever been since it was formed in 2002. In fact, the other three teams in their own division, the Baltimore Ravens, Cincinnati Bengals, and Cleveland Browns, all have won playoff games since the Steelers have.

Since their last playoff win in 2016 against the Kanas City Chiefs, the Steelers have made the playoffs three times. They went 0-3 in those three playoff games with their latest loss coming last season to the Chiefs in a Wild Card game.

The Steelers won’t have veteran quarterback Ben Roethlisberger in 2022 and beyond, as he has now retired. His exit will put an even bigger onus of young quarterbacks Mitch Trubisky and Kenny Pickett as well as on offensive coordinator Matt Canada. In short, the Steelers aren’t guaranteed to make the playoffs in 2022, let alone win a postseason game should they qualify for the tournament.

Going six consecutive seasons without winning at least one playoff game would certainly put the Steelers in a very foreign territory. Such a streak last happened before Chuck Noll was the team’s head coach.

The last time that the Steelers did not finish in either first or second place in their own AFC North Division was in 2012, when they went 8-8. The team’s last year with a losing record was 2003 when they went 6-10. They finished third in their division that season and ended up with the 11th overall selection in the 2004 NFL Draft. They used that selection to take Roethlisberger.