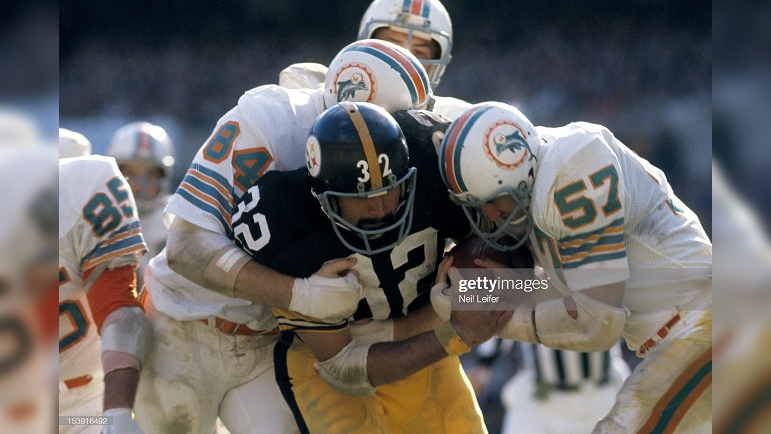 The NFL schedule makers sure did luck out ahead of the 2022 NFL regular season.

Not only does the NFL get to celebrate one of the greatest plays and games in league history on Dec. 24 between the Las Vegas Raiders and Pittsburgh Steelers at Heinz Field in primetime 50 years after the Immaculate Reception, the NFL will also get a chance to celebrate the Miami Dolphins’ 50th year anniversary of the 1972 undefeated team.

That celebration will feature the Pittsburgh Steelers coming into town, which also happens to be a rematch of the 1972 AFC Championship Game, which the Dolphins won by a final of 21-17, heading to Super Bowl VII, where the Dolphins defeated the Washington Redskins 14-7, capping off the only perfect season in NFL history.

Speaking with NBC Sports’ Peter King on the Peter King Podcast, NFL scheduling executives Mike North and Howard Katz discussed some of the scheduling quirks that popped up, including the Raiders-Steelers matchup, which wasn’t really set as a Raiders’ road game until the final play of the Week 18 loss to the Los Angeles Chargers, as well as the Steelers-Dolphins matchup in Week 7 on Sunday Night Football.

“There’s a couple others too. Actually, we got fortunate. It’s also the 50th anniversary of the Miami Dolphins’ perfect season. And they were playing Pittsburgh, that one…we knew we had that one in our hands,” North said to King, according to audio from the podcast. “That’s a rematch of the AFC championship game from that season. And so, we talked to the Dolphins ahead of time, told them we’re looking to schedule them with a home primetime game kind of first half of the season where they could invite Larry Csonka and everybody else back and kind of celebrate that.”

When it comes to NFL history, the Steelers very clearly have a deep, rich part of the league’s success, dating back to the dynasty in the 1970s that won four Super Bowls and spurred a significant number of fans across the country outside of Western Pennsylvania.

In the 1972 AFC Championship Game between the Steelers Dolphins, Miami RB Jim Kiick, who passed away today, had 8 carries for 12 yards and 2 TDs in a 21-17 Miami win. #Steelers https://t.co/1AUUssVmQh pic.twitter.com/2Sgz2eoJQL

In that 1972 AFC Championship Game, the Steelers took a 7-0 lead in the first quarter thanks to a Gerry Mullins fumble recovery in the end zone. Miami tied the game heading into the half as Csonka caught a nine-yard touchdown pass from quarterback Earl Morrall, who later gave way to future Hall of Fame quarterback Bob Griese in the second half on a coaching decision.

Coming out of the half, Pittsburgh took a 10-7 lead on a 14-yard field goal from Roy Gerela before the Dolphins added two touchdowns on the ground from running back Jim Kiick from two and three yards out, taking a 21-10 lead. Pittsburgh added a late touchdown as Al Young caught a 12-yard touchdown pass from Terry Bradshaw, but the Steelers couldn’t pull off the upset in the title game, falling 21-17 in the end.

Of course, the Steelers reached the AFC Championship Game that year due to Harris’s Immaculate Reception on the final play of the game against the Raiders at Three Rivers Stadium, defeating John Madden and Oakland 13-7.