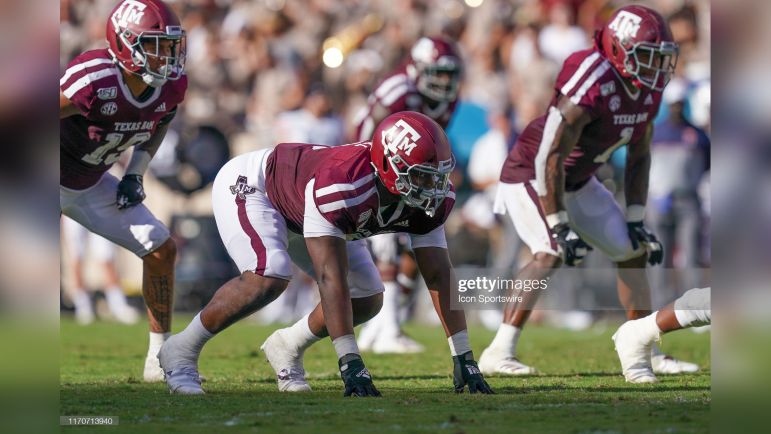 Third-round pick DeMarvin Leal doesn’t quite fit the typical mold of a Pittsburgh Steelers’ defensive lineman. But Kevin Colbert believes he’ll get there. In a world that’s hard to find the “true” type of Steelers’ 4/5 techs, Leal comes close enough. And a full-time job in the NFL will get him the rest of the way there. That’s how Kevin Colbert framed things in an interview with 105.9 The X’s Mark Madden Thursday morning.

“He weighed in, I believe, he was right at 287 or so on his Pro Day,” Colbert told Madden. “He was in here on Saturday after the draft, but we didn’t weigh him or do anything with him there. But he’s got the frame that he can add. I think in Texas A&M’s schematics, they used him a little more outside than he probably would play outside in hours. So I think they wanted him to be a little bit lighter so they could move him in and out.”

Leal weighed in at 283 pounds at the NFL Combine and apparently got his weight up slightly for his Aggies’ Pro Day. As Colbert mentioned, A&M’s scheme dictated his weight. Leal became more versatile in 2021, playing all over the defensive front, and leading to a spike in production with career-highs in tackles for loss (12.5) and sacks (8.5). Teammate Jayden Peevy, who went undrafted, was asked to be the team’s run-stuffer and play in the 325-330 range during the season. During the pre-draft process, he got his weight down to the 307-308 range.

Finding the right body type for the position is tough to do. In the past, the Steelers could simply take 4-3 DTs and bump them out to end. As players have gotten quicker and smaller, it’s harder to find those types and when the team does, they pounce. It’s why they made the aggressive move up for Isaiahh Loudermilk last season. Not because his talent was so immense but because his body type, 6063 and (eventually) in the 295-ish-pound range, was so unique.

In Pittsburgh, Leal will be a defensive end and interior lineman, creating the need for him to add weight and strength.

“Whereas for us in our base defense, he would be an end. But in our sub packages, which we’re in most of the time anyway, he’ll be more interior.”

According to our 2021 charting, the Steelers were in sub-packages 64.4% of the time, a slight increase from 2020 when they were in sub 60.1% of the time. But in an AFC North with strong run games, stopping the run is imperative. And Pittsburgh couldn’t do so a year ago, leading to their worst run defense in franchise history.

While Leal will likely have to increase his calorie intake, Colbert doesn’t believe it’ll hurt his athleticism.

“I could see him adding some weight but the athleticism he displays at that weight, if he adds ten pounds and more muscle, I don’t think he’ll lose any of that. So that versatility to be able to play along the defensive front was definitely attractive.”

Should Stephon Tuitt return this season, Leal’s rookie-season impact could be minimal. He’d be part of a crowded defensive line room, with seven guys having viable chances to make the 53 man roster on a team that almost always carries only six. But if Tuitt doesn’t return, the room breaks cleaner, with Leal replacing him, though Chris Wormley should remain the starter with the second-year Loudermilk heavily in the mix.