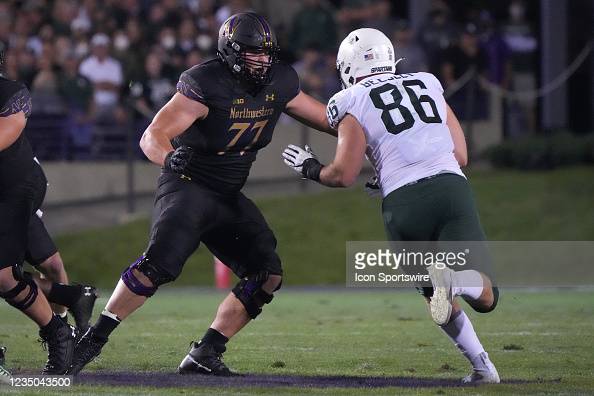 Days after seeing the likes of Pro Football Focus, Bleacher Report, and ESPN all take cracks at a way-too-early 2023 NFL Mock Draft that saw the Steelers address the trenches on the offensive side of the football, CBS Sports’ Chris Trapasso followed suit Monday, slotting in Northwestern offensive tackle Peter Skoronski to the Steelers at No. 11 overall in his 2023 NFL Mock Draft.

That matches the selection from Bleacher Report, while PFF had Oklahoma offensive tackle Anton Harrison at 11th overall, and ESPN’s Todd McShay had Ohio State’s Paris Johnson Jr. at No. 11 overall for the Steelers.

After not selecting an offensive lineman in the 2022 NFL Draft, and signing the likes of Mason Cole, James Daniels, and Chukwuma Okorafor in free agency, there’s still a perception that the Steelers need to address the trenches in the 2023 NFL Draft, and early.

Whomever the next Steelers’ GM is will do something outgoing GM Kevin Colbert never did in his 22-year tenure, should the mock draft predictions come true: draft an offensive tackle in the first round.

That’s the direction CBS Sports’ Trapasso went on Monday with sending Skoronski to the Steelers at No. 11 overall.

“Skoronski has filled in admirably for Rashawn Slater since he graduated at the left tackle spot,” Trapasso writes. “He plays with a nasty demeanor and has quality quicks for a big man.”

Skoronski, much like Slater, has shorter arms, which raises the questions about a potential move to the interior of the offensive line at the next level. Slater, of course, has made those arm length questions look silly though, as he quickly became one of the best left tackles in all of football last season for the Los Angeles Chargers.

Skoronski looks to become the next great Wildcats’ offensive lineman to head to the NFL, and landing him in Pittsburgh would help the Steelers protect their first-round investments in Kenny Pickett and Najee Harris.

The Steelers already have Dan Moore Jr. and Okorafor in place, but Okorafor’s contract is essentially a one-year deal with an easy out in 2023 for the Steelers, while Moore Jr. could slide to right tackle in 2023, should he falter in 2022 in his second season as the starter in Pittsburgh.