The Pittsburgh Steelers have now signed all of their 10 undrafted free agents with the start of the team’s rookie minicamp up next this weekend. By Monday, the Steelers should get several members of their 2022 draft class signed as well and possibly even all of them. With those draft pick signings now on tap, it’s time to look at the Steelers salary cap situation.

Entering Thursday, the Steelers are $12,773,753 under the cap with 90 players on the roster and one more on the Reserve/Injured list. If the team signs any tryout players over the weekend, corresponding moves will need to be made. Any tryout players that are signed will likely receive a very small signing bonus around $1,000.

The Steelers 2022 draft class includes seven players and based on current estimates, the team will need to use roughly $2,257,202 in salary cap space to sign all of them after roster displacement takes place. In short, the Steelers should still be roughly $10,516,551 under the cap after their draft class is signed.

Below is a breakdown of the Steelers’ current salary cap situation as of Thursday morning with all undrafted free agents signed, and included in the attached table is a look ahead at other predicted costs that must be absorbed between now and Week 1. The team can still restructure the contract of outside linebacker T.J. Watt at some point and likely will, unless defensive end Stephon Tuitt winds up being a post-June 1st cut.

In closing, the Steelers’ salary cap situation entering the team’s rookie minicamp weekend is just fine. The only real unknown moving forward is if Watt’s contract will need to be restructured to free up additional salary cap space and how much will be needed from that.

I will once again update the team’s 2022 salary cap situation after the seven draft picks have been signed. 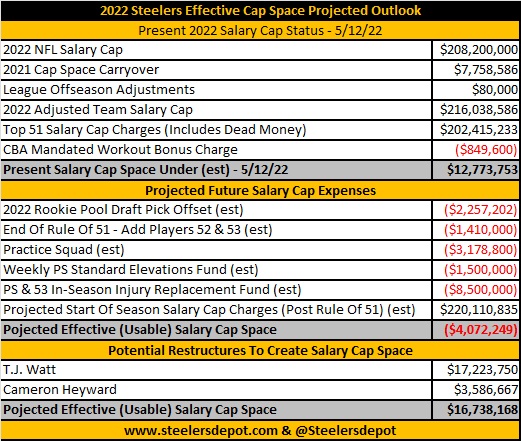