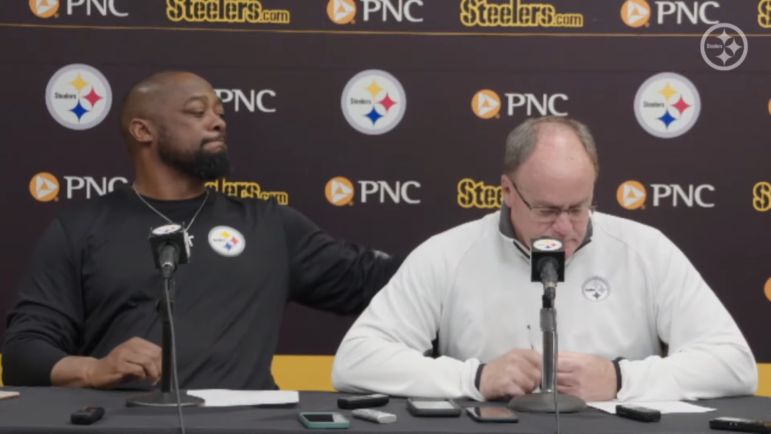 Twenty-two years after landing with his hometown team as President of Football Operations and later General Manager, the time has come for Kevin Colbert to hand it up and transition into a new role within the organization.

Following the conclusion of the 2022 NFL Draft Saturday in Las Vegas, Colbert completed his final major milestone with the Steelers. Though his contract runs through May 31, Colbert wouldn’t allow himself to truly reflect on the moment and allow members of the team to celebrate his time in the black and gold as he was focused on the draft, according to head coach Mike Tomlin.

But a simple question from 93.7 The Fan’s Jeff Hathorn regarding Colbert and how he believes he’s left the organization in great shape, Colbert was caught off guard and allowed the moment to fully hit him, resulting in a powerful display of emotion from a man who has been so reserved and team-oriented throughout his 22 years, never making anything about him, always about Tomlin, Bill Cowher, and the players and coaches on the roster each and every season.

Appearing on the KDKA morning show Wednesday with Larry Richert and Kevin Battle, Colbert reflected on that moment, stating that Hathorn’s question caused him to really start to appreciate everything in the moment, leading to the display of emotion.

“You know what, Kevin, I didn’t have time to think about it because, you know, really we were..trying to make sure we got this thing correct in our vision. You just spend so much time devouring information and trying to make the right decisions,” Colbert said, reflecting on his final draft, according to audio via omny.fm. “I really didn’t have a time for it to hit until your buddy, Jeff Hathorn, asked me a question and it was like, ‘Uh oh.’ It hit me at that point and just everything came crashing at that point, which I think is normal.

“I just started to really appreciate everything that I’ve been able to be a part of,” Colbert added. “It is great organization obviously, and our great hometown.”

That display of emotion from Colbert was rather rare, but it showed just how much the organization, his hometown, and the accomplishments the Steelers have had under his guidance means to him. Hearing him choked up while thinking about Dan Rooney and adding Lombardi trophies to the trophy case for the Steelers was incredibly powerful.

He knew what the task was coming into his role with the Steelers, taking over for Tom Donahue, and he exceeded those expectations and more than completed the task, all while helping oversee two Hall of Fame coaches and the selection of multiple Hall of Fame players, including Troy Polamalu and eventually Ben Roethlisberger.

His legacy is intact after 22 years, and he’ll eventually head into the Hall of Fame thanks to his accomplishments at the helm of one of the most storied franchises in NFL history.