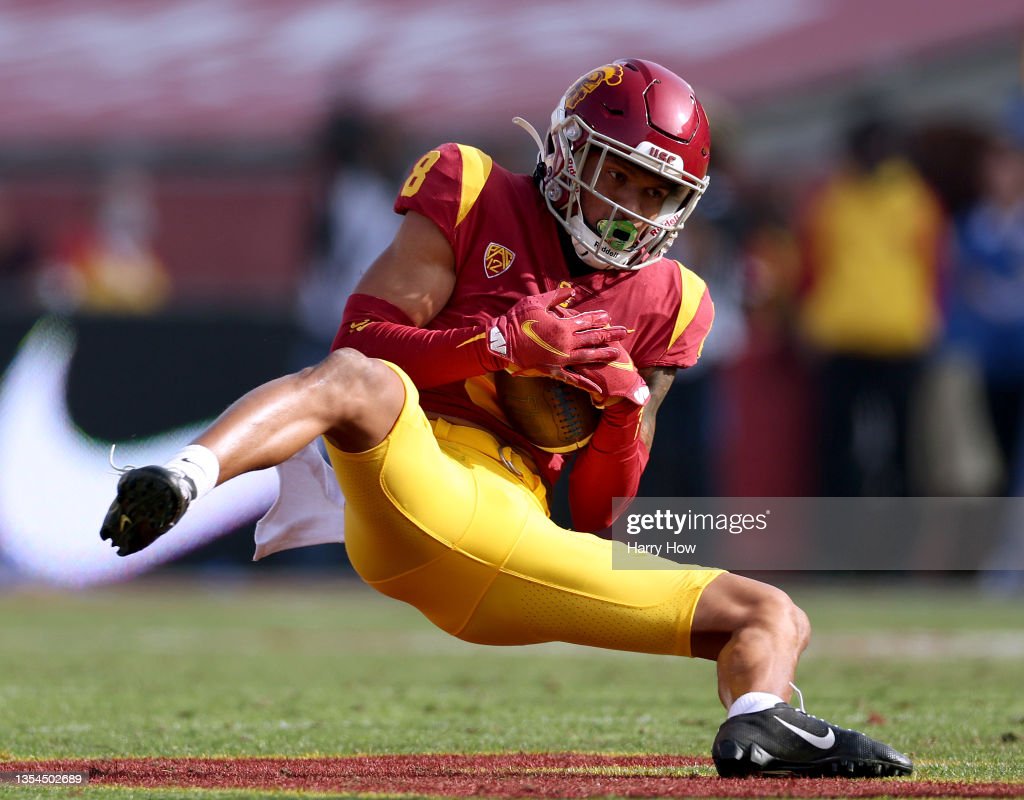 The offseason excitement continues to build, as the Steelers are now a full week removed from NFL draft weekend. Outside of the seven rounds of selections are the under the radar prospects who will also get a chance to make their mark leading up to the start of the 2022 season.

Pittsburgh passed on drafting a cornerback in this year’s draft but managed to land a couple undrafted CB’s shortly after, including USC product Chris Steele.

Steele was a heralded recruit out of high school, and Alex Kozora was able to take a closer look at his play in the film room recently while providing an UDFA profile.

In Steele’s three seasons of play at USC, he faced 117 targets in coverage, allowing 72 receptions and 9 TD’s. Steele was also in a press coverage look on 37.4% of those snaps, and as his stats indicate below, as the downs grew, so did the passer rating when targeted in coverage.

What’s interesting with Steele and press coverage is he seemed to struggle a bit with it. In fact, eight of the nine total TD’s he surrendered in college were in a press coverage look.

Steele allowed a higher percentage of pass completions from a non-press look, but the passer rating yielded was lower and the TD’s allowed lower, as well.

Researching by depth is also interesting with Steele, as he didn’t allow much on pass attempts 20 or more yards downfield. Sure, he was beaten for a couple of TD receptions of 20+ yards, but he collected the majority of his PBU’s at this depth and beyond to go along with a couple of picks. His passer rating allowed was also quite low in respect to the other depths.

Finally, in looking at how Steele fared against specific routes, further indication is given on how he did against Go routes among others. 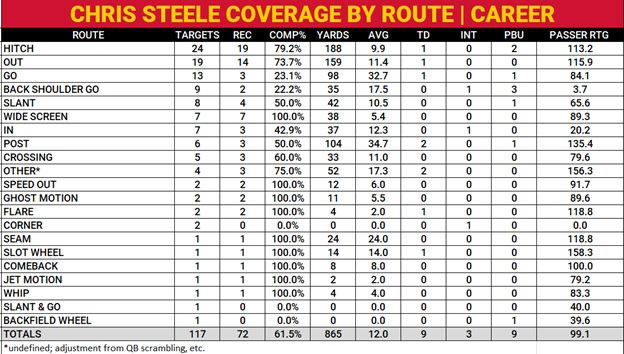 The all-popular Hitch and Out routes are how Steele was targeted most often. The next two highest-targeted routes though, the Go and Back Shoulder Go, show Steele played them well by the numbers.

By combining just those two, Steele’s stat line looks like this:

Vs. Go & Back Shoulder Go Routes

It remains to be seen how Steele will fare in his bid to make the Steelers roster or practice squad. As an UDFA it’s always an uphill climb, but the Steelers in recent years have rostered and played a few CB’s who were indeed undrafted – Arthur Maulet, James Pierre, and Mike Hilton before them. Newly signed Levi Wallace is also an UDFA. Clearly it’s difficult to tell at this point what Steele’s chances are, but he will soon get his chance to see if he can take advantage of landing undrafted in Pittsburgh.