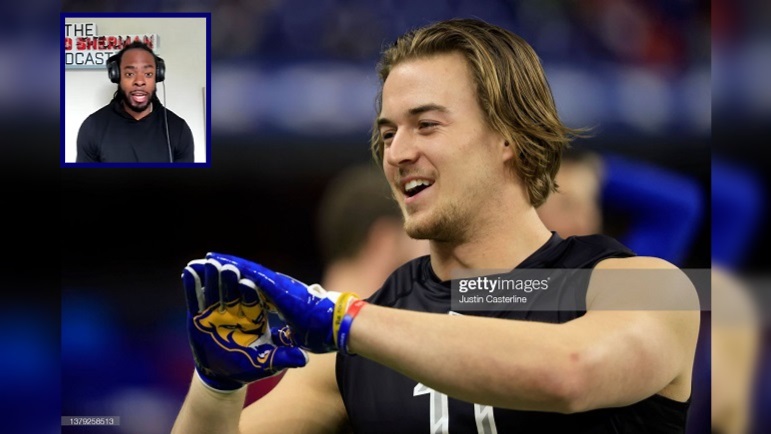 The undersized hands of new Pittsburgh Steelers quarterback Kenny Pickett sure were a huge talking point during the pre-draft process, and now that that process is over with, there are still a few people revisiting the topic as part of them attempting to predict the young player’s future. One of those people is former NFL cornerback Richard Sherman, who recently weighed in on the selections of several from the 2022 quarterback draft class on his own podcast.

“Do I think he’s the quarterback of the future? I don’t know,” Sherman said of Pickett. “It’s hard for me to trust a quarterback who wears gloves all the time. It’s just different. It’s just different. I just, I have hard time with it. But he slings it. He’s effective and we’ll see how effective he is in Pittsburgh. They do a great job developing guys. They haven’t had another quarterback under center starting consistently since Ben Roethlisberger. I mean, Ben’s been there for what, 13 years, 14 years, something like that? And so, so that’ll be interesting.”

As for Sherman’s thoughts on the size of Pickett’s hands, he must have forgotten all about the things that were said about his former Seattle Seahawks teammate, quarterback Russell Wilson, prior to him being drafted back in 2012. In case all of you need reminding, Wilson measured in at the 2012 NFL Scouting Combine at 5105. Back then, Wilson’s height and potential ability for him to have success at the NFL level were widely debated. Wilson, however, went on to guide the Seahawks to a Super Bowl championship, and Sherman was on that team.

After the Steelers drafted Pickett, general manager Kevin Colbert made it clear several times in different interviews that the quarterback’s hand size never was a concern to the organization during the evaluations.

“Honestly I never even paid attention to it,” said Colbert in one interview. “I believe it was the Clemson game and there were other scouts here and they said, you know, he has got a small hand and I said, ‘No, thanks for sharing.’ But it really didn’t matter because it was never a factor. You know, his fumble rate was not anywhere near a problem. He could certainly throw the football and sometimes we get hung up on all that analytical kind of measurements and short arms and long arms and so forth. I just want to see the results. I know Coach [Mike Tomlin] does too. It certainly didn’t affect them.”

‘Two-Glove Kenny’ played quite a few college games in rainy and cold weather throughout his career, and not only that, but several of those games were also played at Heinz Field, the Steelers’ home stadium. Sure, Pickett, who has a double-jointed thumb on his throwing hand, did fumble something like 38 total times during his college career, with seven as a rusher, so he certainly will need to be more cognizant of that at the NFL level.

Overall, Pickett’s hand size isn’t likely to be the deciding factor when it comes his ability to have success at the NFL level. If he can’t ultimately become a top 15 quarterback in the NFL, it likely won’t be because he has 8.5″ hands.

Small hands aside, Sherman said during his recent podcast that he was quite surprised that Pickett landed with the Steelers at 20th overall and as the first quarterback taken in the 2022 NFL Draft. Even though Pickett played right next door to the Steelers the last five seasons, Sherman believes Colbert and company did a fantastic job of hiding the fact that the Pittsburgh product was their top-rated quarterback.

“I was even more surprised by Pittsburgh because they put up a huge smoke screen,” Sherman said. [They] made it seem like ‘Hey, Malik Willis is our guy.’ They’re at every pro day, every everything. Tomlin’s right next to him in every picture. You’re like, man, they’re talking to him, they’re interviewing him, they had him on a visit, I think. Then here comes their pick and low and behold, they take Kenny Pickett. Now in hindsight, you see it and you’re like, oh that was a brilliant smoke screen.”

Yeah, it really wasn’t a smokescreen at all when it comes to the Steelers and Pickett. Colbert gave clues throughout the pre-draft process that Pickett was the team’s top-rated quarterback. Most of us, and that includes Sherman, just failed to pay attention to those clues.

This might be a fun post to look back at several years from now and especially if Pickett winds up winning a Super Bowl in his first few years in the NFL like Wilson did with the Seahawks.