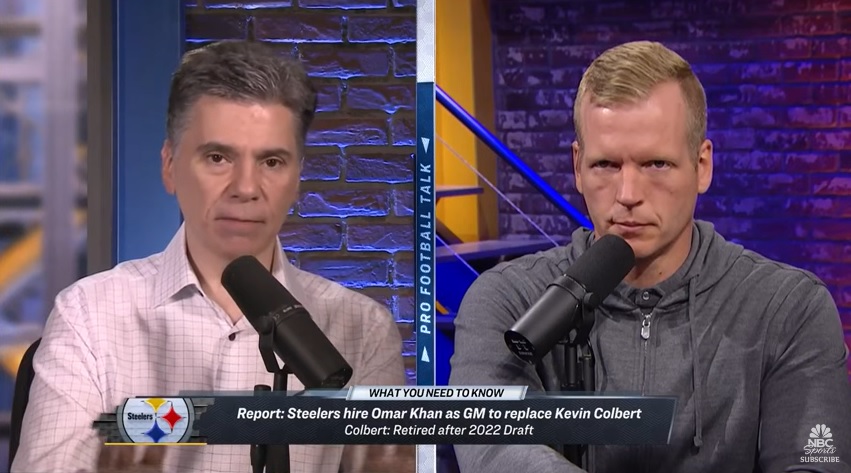 The NFL world is reacting to something that happens about as often as a new pope. The Pittsburgh Steelers have a new GM. The white smoke has just gone up with the team officially announcing Omar Khan as the team’s successor to Kevin Colbert. Though Khan has been a largely unknown name in many media circles, Mike Florio and Chris Simms over at Pro Football Talk praised the move yesterday.

Despite Colbert’s success and two Super Bowl rings, he is regarded as one of the most humble GMs in football, the total opposite of the Jerry Jones’ of the world. Colbert’s well-liked, respected, so much so he had mini Pro Day send-offs at places like Clemson, where he scouted for literal decades.

Khan brings a similar and quiet resume, working behind the scenes in Pittsburgh since hired in 2001.

“Not a big self-promoter,” Florio continued about Khan. “Doing his job. Happy with he job that he has. Not constantly looking for the next job.”

There should be one caveat to that overall accurate thought. Khan certainly tried to become a NFL GM elsewhere before. Starting with Seattle in 2010, and nearly getting that job, he’s interviewed for more than a half-dozen GM roles over the last decade before Pittsburgh’s promotion. The fact Khan is still with the Steelers is a minor miracle. He reportedly was so close to being named the Houston Texans’ GM last season that he and Houston were in contract negotiations. But Jack Easterby and owner Cal McNair intervened at the last minute and pivoted to old Patriots’ pal Nick Caserio, who got the job.

Overall, Florio praised the hire and decision to stay in-house.

“It is an ego-free zone and that made Omar Khan [the GM]. If I had to pick a candidate, it would’ve been him. And he’s the one who got the job.”

Despite the praise from Florio and others, results are all that matter. Pittsburgh isn’t in their best position of strength, an offseason that’s seen many changes, including at quarterback. The AFC North is one of the most competitive divisions in the league and for once, Pittsburgh’s no longer considered one of the conference favorites. Khan’s goal will be to get the team back into Super Bowl contending status. Pittsburgh is as patient as any team, but Kevin Colbert offered quick results, taking a 6-10 team in 1999 to 9-7 in 2000 and 13-3 in 2001, making it to the AFC Championship Game.