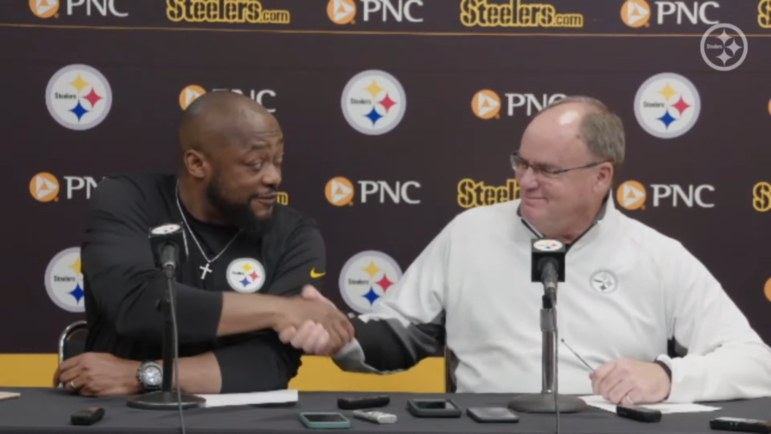 The Pittsburgh Steelers’ offseason has certainly been one marked by change, none bigger than the retirement of quarterback Ben Roethlisberger and the subsequent drafting of his would-be replacement, Kenny Pickett, in the first round. The offensive line and the secondary are two other areas that have underdone some renovation, among others, in an unusual amount of tinkering during Kevin Colbert’s final offseason as general manager.

For Sam Monson at Pro Football Focus, that all works out to a B grade for their offseason as a whole. Their free agency grade was deemed to be ‘Average’, highlighted by the signings of quarterback Mitch Trubisky, offensive linemen James Daniels and Mason Cole, cornerback Levi Wallace, and linebacker Myles Jack, while they were given a B+ grade for the draft. Monson writes:

With Ben Roethlisberger‘s retirement, the Steelers were one of the most quarterback-needy teams heading into the offseason. They secured a fallback option with Mitchell Trubisky in free agency before adding their future in Kenny Pickett with their first-round draft pick. Trubisky is worth a look given his draft status and physical tools as well as the year of apprenticeship under Brian Daboll and Josh Allen in Buffalo, but he is likely a starter for a few weeks, at most. Pickett was many evaluator’s top quarterback in the draft, earning a 92.2 PFF grade in his final college season, but the next quarterback went two rounds later and Pickett was by no means a consensus No. 1.

Signing James Daniels and Mason Cole in free agency gives the team some competition along an offensive line whose jobs will be a lot harder this season as they move away from Roethlisberger’s league-quickest average time to throw. Linebacker Myles Jack and cornerback Levi Wallace are two solid additions to the defense.

In the draft, George Pickens has first-round tape with true “X” receiver skills. He posted an 88.0 PFF grade as a freshman before his career stalled, and he missed most of last season with an ACL injury. Calvin Austin III also adds some real speed and explosiveness on offense.

As is pretty much always the case, the ultimate fate of the Steelers’ draft class, and really, of the offseason, swings on the pendulum named Pickett. If he really is their future franchise quarterback, then it’s all been a home run. If he’s not, then what’s the point of the rest?

They did upgrade their wide receiver position, arguably even when taken as a net whole from last season to this season, even with the losses of JuJu Smith-Schuster and others via free agency. George Pickens and Calvin Austin III are two players to be excited about.

Still, the offensive line, particularly the tackle position, obviously remains a concern, and there are outstanding questions about availability and performance along the defensive line. This wouldn’t be considered a top five roster, certainly. But they could have done a lot worse. And a lot of teams did.