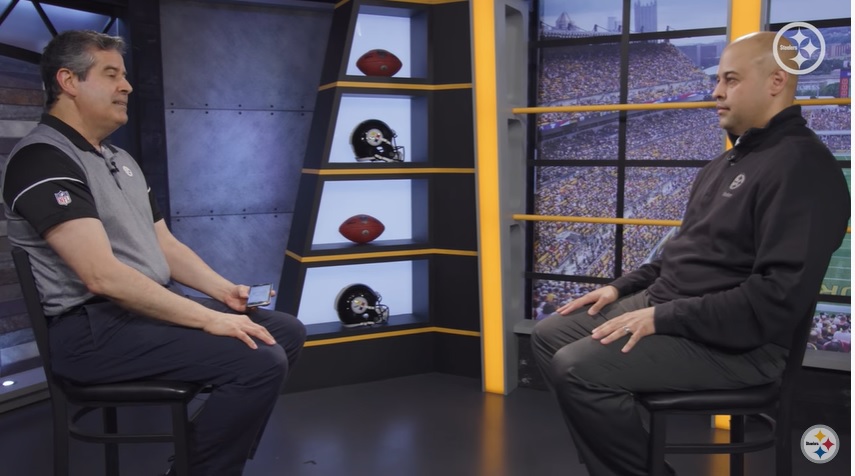 Omar Khan is his own man. And he won’t follow Kevin Colbert’s model step-for-step. But one thing that will remain constant is the team’s roster construction philosophy. Build through the draft. Khan confirmed as much in an interview with Alvaro Martin posted to the team’s YouTube channel Friday.

“That is not going to change,” Khan told Martin during the interview. “I have ideas I am going to bring but the foundation is still the [same].”

Khan knows as well as anyone in the organization the value of building through the draft. He’s seen Pittsburgh do it since being hired in 2001, the same year the team drafted Casey Hampton in the first round. The 2002 class is one of Colbert’s most underrated, hitting on his first (Kendall Simmons) second (Antwaan Randle El, a QB turned WR), third (Chris Hope) fourth (Larry Foote) and seventh (Brett Keisel) round picks while getting contributions from other names in that class like Verron Haynes and Lee Mays. 2003 saw the Steelers trade up for a Hall of Famer in Troy Polamalu while still snagging Ike Taylor in the fourth round while 2004 brought in Ben Roethlisberger, who will join Polamalu in Canton five years from now.

Picks and draft classes that surely made an early and impactful impression on Khan. Those years might have been the height of Colbert’s drafting success but the Steelers remain one of the best and most consistent drafting teams. In 2017, they found TJ Watt, JuJu Smith-Schuster, Cam Sutton, and James Conner with their first four picks. 2021’s class looks promising with Najee Harris and Pat Freiermuth quality starters while seventh-round pick Tre Norwood may become a hidden gem.

Khan’s comments are not surprising. In fact, they’re the mantra of what every new general manager says. The first newly hired GM to say “I’m going to blow $90 million in free agency” will be the first, though inevitably, many of them do given the pressures of the job to produce immediate results. But Khan’s words here are much more trustworthy given the track record of the Steelers’ organization, how the Rooney’s operate (after all, it’s their money Khan will be spending) and the path to success Pittsburgh’s had building through the draft for the last 70 years.