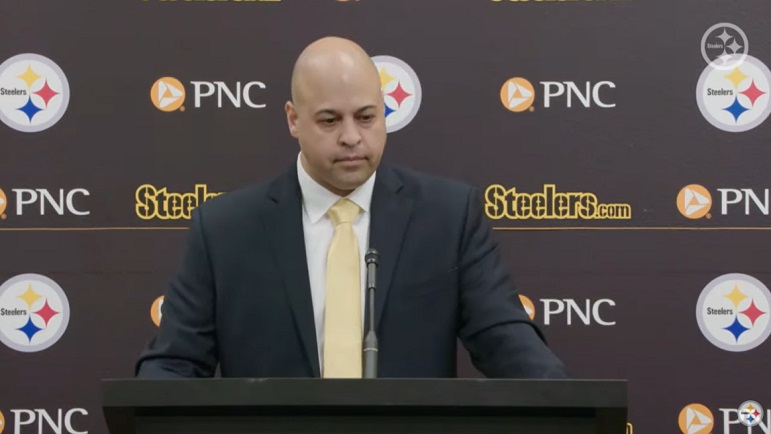 Most football titles are self explanatory. The offensive coordinator…coordinates the offense. The linebackers coach…coaches the linebackers. You with me?

But at the top of the front office food chain sits the general manager. And that role, like the all-encompassing title, means a lot of different things. Appearing on The Jed Hughes Podcast, new Steelers’ GM Omar Khan outlined the many hats he’s going to wear.

“Obviously the procurement of talent is a very important piece of it,” Khan told the show. “But there’s other aspects of it. Obviously managing the cap. You have to deal with the league office. Trust me, there are issues that come up on a weekly basis that nobody knows about that you have to deal with. Both internally and externally that’ll affect your team. It’s the managing of people, all the different departments, making sure they’re all working together. The hiring of good people, the right people, that’s an important piece of this. It’s a broad scope. The job entails a broad scope of responsibilities today.”

The general manager is like a CEO, something Andrew Brandt referenced in a recent podcast, with the goal of growing and captaining a billion-dollar organization. The GM is the point man, the one who makes the final decisions, and makes sure everything else is running smoothly. NFL teams operate top-down and if things aren’t going well at the top, they seldom are doing any better at the bottom. Teams may be starting to realize the need for a better business mind than a pure football background. The Eagles’ Howie Roseman has taken as similar career path, graduating from law school and being hired by Philadelphia in 2000 to help with salary cap management.

Khan is highly regarded around the league and is considered an incredibly smart individual who certainly has worked his way up to this position. He started at as an assistant at Tulane, shooting video of practice, cutting up tape, and doing the grunt work no one else was willing to do. That led him to the NFL and New Orleans, getting work in the front office and along coaches, crucial experience and perspective to understand how coaches think and operate.

He certainly has big shoes to fill in replacing Kevin Colbert, who won two Super Bowls running the Steelers over his 22-year career in Pittsburgh. Khan has a different background than the old-school scout, that’s who Colbert was, but he’s worked alongside Colbert since being hired in early 2001. He’ll also have a “football guy” as his right-hand man in assistant GM Andy Weidl, a Pittsburgh native who briefly worked with Khan in New Orleans.